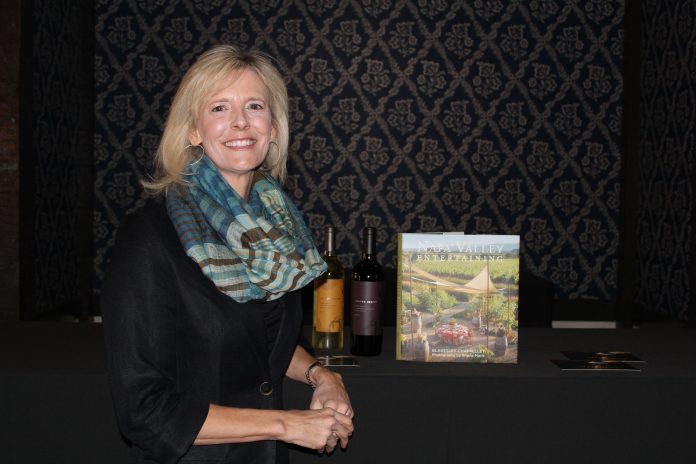 During the Sip and Savor event at Callaway Gardens, three Bloom Master Series classes were held, offering Entertaining Napa Style, Biscuits and Bundts and Big Green Egg in the Overlook Azalea Garden.
While we were looking forward to attending all of these classes, the Napa entertaining class was especially appealing since we have had a fondness for the wine country. Napa used to be one of our favorite places to visit with its sweeping vineyards in an idyllic setting.
Every visit to Napa included a stop at the Oakville Grocery to browse interesting products, and then savor lunch or dinner at Mustards Grill. I could just imagine how amazing it was to live there.
Entertaining Napa Style
Suzanne Phifer Pavitt, proprietor of Phifer Pavitt Wine
Michael Sullivan, Master Butcher, American Butcher, Birmingham

Growing up in a small town called Ringgold in northwest Georgia, Suzanne’s family were Baptists and did not drink any alcohol.
After she graduated from high school, Suzanne attended college on a basketball scholarship in Jefferson City, Tenn. During the summer of her sophomore year, a friend invited her to her parents’ home in California. On the road trip, they ate peanut butter and jelly sandwiches and took turns driving. Suzanne had planned to work during the summer and return to college in the fall.
“To this day,” said Suzanne, “I have eaten at some of the greatest places in the world and have been blessed to have amazing adventures, but that road trip will put a smile on my face.”

She planned to work in California during summer and return to college. Suzanne applied for a typist job that expanded into a management program, which allowed her to receive degrees in computer science. Instead of returning to Georgia, she was hired by a high tech company.
Suzanne remembers she became interested in wine while entertaining clients at an elegant restaurant. The wine was being ordered for each course. It was fascinating to her. That evening launched her love of wine. She spent 14 years in high tech entertaining clients and learning about wine.
She met her husband, Shane, 22 years ago. They have a weekly date night that is sometimes an elaborate meal and other times at the ball field. “The point is it is about connecting with those people who are special to you,” Suzanne said.
“We were on one of those more elaborate date nights eating and drinking our way through Tuscany,” she said, “when I told my husband we were going to write down ten things we would like to do. We both wrote down we would like to have to have a boutique winery.
“That set in motion the next yes opportunity,,” she added. “We started looking at property in different places for a winery.”
While Shane wanted two acres with a house, Suzanne fell in love with 24 acres in Calistoga with nothing on it. It had been in the same family for 100 years. “I purchased it, left my job in high tech, had a couple of babies and launched my wine in 2005. It has been 13 years of excitement. I live at the top of the winery and the vineyards at the entrance.
“One of the beautiful things about living in the Napa Valley and being in the wine business is that we are in the entertaining business,” she said. “We are always entertaining. I love entertaining. I prefer entertaining that is approachable. I like to make it manageable.”
When her friend, Blakesley Chappellet, was putting the Napa entertaining book together she approached Suzanne to include her. Blakesley decided to include all three of her ideas for entertaining with three perfect dates. They are outlined in the book.
The first date night is a brunch with girlfriends who get together for yoga. Suzanne served quiche, salad and English muffins from a local bakery. She served her homemade apple butter with the muffin. They now have the “date night” once a quarter.
Her second date night was with their two sons aged 16 and 17. Their Airstream was taken on the property to enjoy goodies around a campfire. Suzanne arranged a hot cocoa bar with assorted toppings. She served assorted cheeses, grilled burgers and made s’mores around the fire.
Her third date night was a black tie dinner at home. Suzanne cooked coq au vin in a slow cooker and set a lovely table in the living room. She wore a full-length gown. “Put that effort into that person that means so much to you, she said.
“I really got into preparing for Shane. I had a great bottle of wine and lit candles. We wrote a love note to each other. It turned out to be a beautiful and meaningful date night.”
After Suzanne told about entertaining on three date nights, Chef Michael Sullivan served two flavorful bite plates to pair with two of her wines. Phifer is her maiden name and Pavitt her married name.
The chef prepared a smoked trout spread with a lemon on crostini and blue cheese with muscadine jam to serve with Phifer Pavitt Sauvignon Blanc.
Sweet Grass Tome Cheese from Thomasville, Ga, was served with a drizzle of honey alongside pate terrine charcuterie, both paired with Phifer Pavitt Cabernet Sauvignon.
“Cherish moments together,” said Suzanne, “because life doesn’t come with a pause button. ‘Date Night’ is not just our wine, it’s a way of life.”
Biscuits and Bundts
Brian Hart Hoffman, Editor-in-chief, Bake from Scratch Magazine and president/chief Creative Officer of Hoffman Media, Birmingham

I met Brian a couple of years ago at a media event in Birmingham but did not know he enjoyed baking so much. His presentation was impressive.

Brian’s mother, Phyllis Hoffman, started “Southern Lady” 21 years ago, and it has expanded. They now have eight full time chefs in their test kitchens to create food for all 12 of their magazines.

Brian has been working with the magazine 12 years. He is a passionate home baker. He taught himself to bake and has attended workshops across the country and Europe. He loves being in the kitchen and loves baking. While he can cook, baking is his favorite.

He started the magazine called “Baking From Stratch”, which is dedicated to baking.

For Brian’s presentation, he first made Buttermilk Biscuits. While he began telling how to make biscuits, the kitchen served tall biscuits with butter and muscadine preserves.

Throughout the demonstration, Brian walked around the tables to show how the dough looked in the bowl as the recipe was progressing.

To make flaky biscuits, he patted the dough into a rectangle and cut it in quarters. The quarters were stacked and then pressed back into a rectangle. He did this four times.

Then the biscuits were cut and placed on a pan to bake. To avoid having dough to reroll, he cuts the dough into squares at home. This prevents the dough from being wasted or over handled.

Brian explained that biscuits can be frozen on a baking sheet, and when frozen, placed in a freezer bag. When ready to bake, place biscuits on pan to thaw before baking.

After the biscuits were prepared, a cocktail was served between the biscuit and bundt cake demonstrations. The recipe for the cocktail was from Hoffman’s book on cocktails.

After the cocktail was served, Brian began making the Carrot Chai Bundt Cake. He suggested using “baking” nonstick spray rather than cooking nonstick spray. He said it is best to spray the pan just before you pour in the batter.

He also suggested premeasuring all ingredients before starting to bake and using a kitchen scale to measure the flour by weight. It is also important to have all the ingredients at room temperature.

After the presentation, a slice of the Carrot Chai Bundt Cake was served that had been prepared by the kitchen.

Both the Buttermilk Biscuits and Carrot Chai Bundt Cake were scrumptious.

Last year, we enjoyed wonderful dishes at Chef Carter’s Farm restaurant in Bluffton. The menu has a variety of small plates that are nice for sharing and offers a chance to sample different dishes. The food is prepared with fresh, seasonal ingredients of the Lowcountry.

For this presentation in the Overlook area at Callaway, the chef grilled whole snapper on a Green Egg for creating two fish dishes. During the presentation, Kevin Ryan served two of his craft beers.

When making the Chimichurri, he suggested not adding the red wine vinegar until just before serving. The sauce can be prepared ahead, except for the vinegar, and it will keep well with the herbs in olive oil.

Herbs include chopped parsley, cilantro and oregano with garlic, lemon zest and chili flakes. Sometimes he will add fresh chopped chilies instead of the flakes.

The Laab Dressing is generally served over a salad with minced meat or fish, fresh herbs, cucumber, red onion and cabbage.

When preparing the fish, the chef suggested being sure the gills are removed, using scissors. He leaves the head on and feels some of the best meat is in the cheeks.

The chef made three scores on each side of the fish in order for it to cook more evenly. He left the skin on when the fish since it was going to be grilled.

The cavity of the fish was stuffed with lemon slices and green elephant garlic. He coated the fish with oil to help prevent it from sticking and to aid in browning. The chef seasoned the fish generously with kosher salt and finished with sea salt after it was grilled.

Before grilling, Chef Carter suggests coating the grill rack with nonstick spray, and be sure the grill is hot before placing fish on the rack. Don’t touch the fish until it is ready to turn.

For the second fish dish, he tossed Laab Dressing with chopped pieces of fish, fresh herbs and chopped cucumbers, red onions and cabbage.

As each dish was completed, small samples were served to those attending.

If you are interested in attending entertaining and cooking classes, mark your calendar to check out the series next year at the Sip and Savor event at Callaway Gardens.

What children learn from ‘Honest Abe’