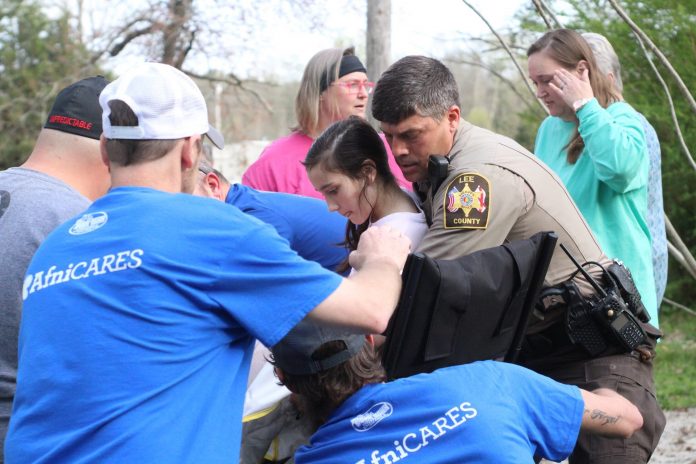 Kayla, 11, was home with her father, soon-to-be stepmother and best friend Taylor when the tornado touched down and was the sole survivor of the group. Grimes garnered several injuries which led to three different surgeries at Children’s Hospital in Birmingham. During this time Kayla’s mother and stepfather, Michelle and Adam Gladden, primarily cared for her at her side.

However, back home in Beauregard, a slew of supporters came to her aid as well. Friends and family banded together to create a homecoming for Kayla that the whole community could be a part of.

Angela Kirkland, a nurse at East Alabama Medical Center, and Rita and Megan Harman worked together to spread the word via social media that Kayla and her parents would be traveling back from Birmingham Friday afternoon, and their request was simple.

“We want to line her driveway/road as she’s pulling in!” Megan wrote on Facebook.

But what began as a gathering at Kayla’s home turned into a parade fit for royalty as she entered Lee County. The route included stops at Beauregard High School and Providence Baptist Church before arriving home.

At the high school, they picked up a trail of escorts, including members from the police department and other first responders that worked directly with Kayla. Workers at the Providence Baptist Church associated with Billy Graham and Samaritan’s Purse presented her with a Bible in memory of her lost loved ones.

“Kayla’s testimony is important. All the victims’ testimonies are equally important. Kayla holds a special place in my heart because I know what a blessed fighter she is, and I recognize the long road ahead of her,” nurse Angela Kirkland said.

Kirkland did not previously know the family, but she responded to Kayla’s injuries when she arrived to the hospital and was moved by her story, doing everything she could to make Kayla’s homecoming a special event.

Before the family arrived home, volunteers and extended family members clad in blue T-shirts carried in food and drinks for Kayla and her family, offering to cook meals, telling jokes and occasionally tearing up at the thought of their “Kayla-Bug” returning home. They were excited, murmuring to each other of her character.

“She is so strong, and you will never catch her without a smile on her face,” said Kayla’s aunt, Melissa Smith.

Friends and strangers alike lined up along Lee Road 119 to welcome Kayla home and cheered for a spirit of recovery, not just for Kayla, but for all of Lee County. Balloons had been attached to her mailbox, and signs were held up in support. Upon arriving home, where a new wheelchair ramp had been assembled, and where her family and friends waited for her, Kayla and her parents smiled and cried at the outpouring of love.

“She needs to know that we will be here for her as she goes forward wit her physical and emotional recovery,” Jackie Moran, a member of the community who did not previously know Kayla, said after tying balloons to the mailbox.

Several members of the party helped Kayla out of the car she arrived in and into a wheelchair, and then, in the midst of everyone looking on this brave little girl, she requested a trip to Waffle House.

Her light-hearted spirit in this time can only be reflective of what is to come from the community. Like Kayla, Lee County will recover from this dark time and come out on the other side stronger and full of love.