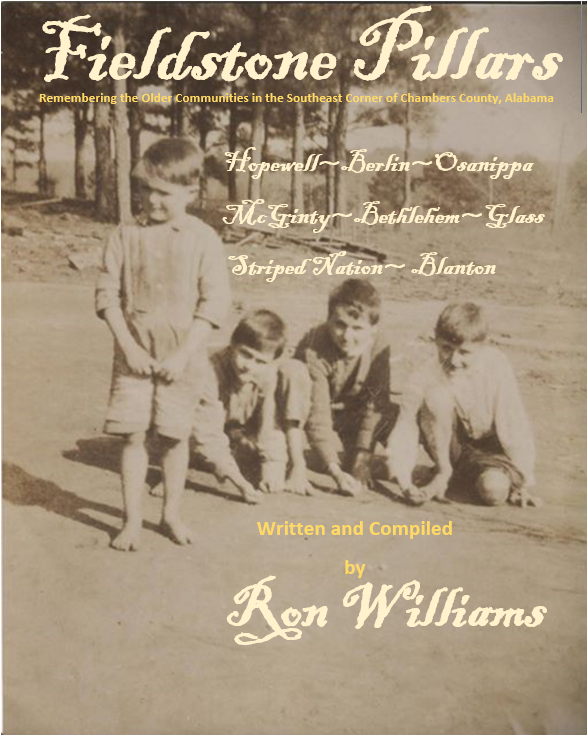 By Kayla Evans
For the Opelika Observer

“So many people and places have faded to memory,” Ron Williams wrote in his new book.

“Fieldstone Pillars” is a collection of stories and articles about the older communities in the southeast corner of Chambers County, Alabama and the northeast corner of Lee County.

Going through the lives of people who lived in Chambers County, the book shares memories of family members and ancestors.

It mentions the communities of Berlin, Osanippa, Glass, Bethlehem, McGinty and Hopewell in Chambers County. It also discusses Striped Nation and Blanton in Lee County, which were originally located in Chambers County prior to 1866.

The book has over 270 pages of memories from local people and families in the pioneer days through the present time.

A story included in the book is about John Parnell, the famed peach grower, and the visit from his brother, Charles, who became the Uncrowned King of Ireland. Also shared is a story about a boy who killed his teacher at a one-room schoolhouse.

Old letters about local gossip and stories about many people are included in the book.

“We meander in and out of the communities, and we know the approximate lines, but to us, it is simply home,” Williams wrote. “The area is growing up now.”

Growing up with his grandparents in a house that was built in 1839, with his great aunt living next door and his family hosting a family reunion every year, Williams acquired a love of family and local history. He is also related by blood, marriage or friendship to many of the families in the area, and he has been collecting information about the area for years.

He is a part of the seventh generation of his family to live in Chambers County. His ancestors settled in Hopewell in 1833.

“I grew up in a house which rested on stones that had been wrestled from the ground by my pioneer ancestors,” Williams wrote. “The old homeplaces and one-room schoolhouses sat on fieldstone pillars.”

“And when they died, a single fieldstone was placed at the head and foot of their graves,” Williams wrote. “What mean ye by these stones some may ask. They are the marks of our ancestors. They lived and worked and played and died. They passed this way, and they left their mark — and we remember.”

“Fieldstone Pillars” is one of two books that Williams has been working on. He hopes to complete the second one in the next year.

Williams’ last book, “Past Times,” was a collection of articles relating to the local history of East Alabama and West Georgia. Included was a section on the 1959 Chambers Murders.

To reserve a copy of “Fieldstone Pillars,” send an email to hopewellroad@yahoo.com.