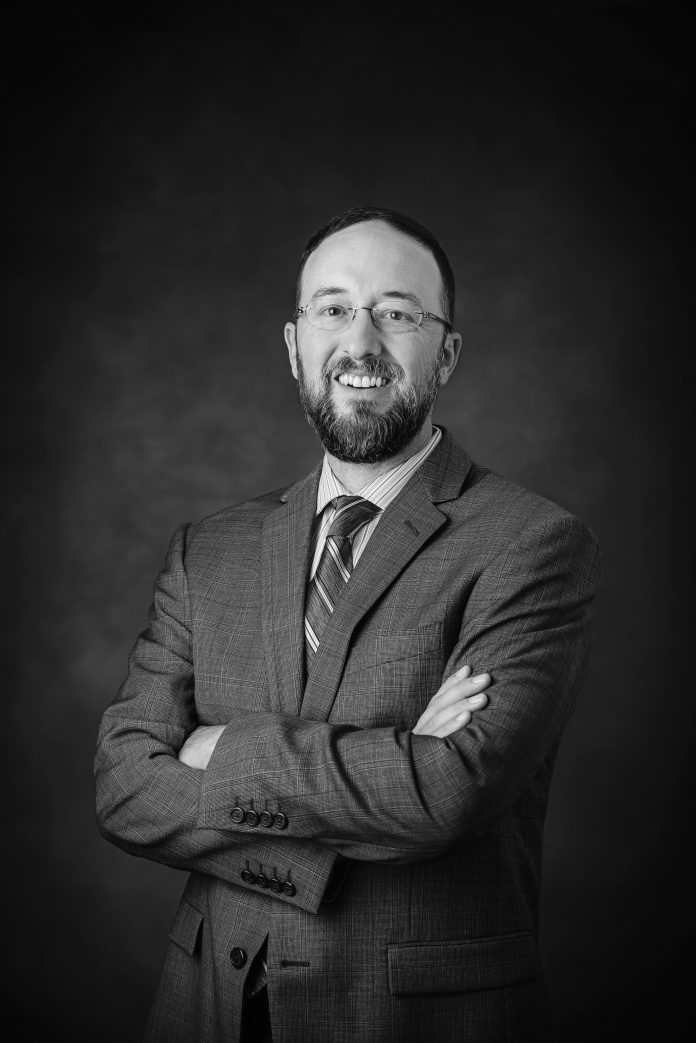 Every two years, an active staff physician is voted in by the medical staff to serve as the new chief of staff at East Alabama Medical Center. Last month, Michael Roberts, M.D. was officially announced as the physician who will fill this role from Oct. 1, 2019 – Sept. 30, 2021. It seemed like a natural next step for the 44-year-old who was born at Lee County Hospital (now EAMC) in the early morning hours of March 30, 1975. That was a Sunday—Easter Sunday—and also National Doctor’s Day.
Born to Don and Lorna Roberts, Michael lived in Alexander City for the first 10 years of his life while his father was the head football coach at Benjamin Russell High School. After 10 years in Tallapoosa County, Robert’s family moved to Opelika in 1985 where Don had a couple of different positions in Opelika City Schools before serving as principal at Opelika High School from 1989 to 1998.
Michael joined the OHS football team as placekicker and still holds a record or two. From there, he decided to attend A.U.—Anderson University in Anderson, Indiana. Michael again was the placekicker and kicked all four years for the A.U. Ravens. More importantly, he earned a pre-med degree and was accepted to medical school at UAB. After graduating from UAB with his medical degree in 2001, Michael completed a three-year residency there in internal medicine.
After a short stint at St. Vincent’s Hospital in Birmingham, he joined Internal Medicine Associates in Opelika in 2008 and became a hospitalist at EAMC. Coming home to EAMC meant joining his grandfather, Rev. Loren Sutton, who has served as an associate chaplain at the hospital—both officially and unofficially—for more than 40 combined years.
Sutton said seeing Michael named as chief of staff makes him and his family proud.
“Michael treats everybody the same,” Sutton said. “He knows how very important every employee is at the hospital. The way he acts, the way he lives, is a real credit to his parents.”
As chief medical officer and a peer of Roberts, William Golden, M.D. says this honor for Roberts is well deserved.
“Dr. Roberts has been very engaged in improving the quality of care at EAMC over the past few years with his work in the ICU and with leading a team to improve care in sepsis management.”
“Dr. Roberts is recognized as a skilled clinician and leader by his peers,” Golden added.
Roberts said he is thankful to be the new chief of staff.
“We have an amazing group of physicians here at EAMC, who are passionate about medicine and seek to provide the highest quality care to their patients,” Roberts said. “I am honored to have the opportunity to serve this medical staff in this role.”
The role of a chief of staff
A chief of staff serves as a liaison between the medical staff and the hospital board; works with the hospital CEO and chief medical officer to develop policies, coordinate care and enforce the policies of the by-laws; heads the medical executive committee and serves on other committees of the medical staff.