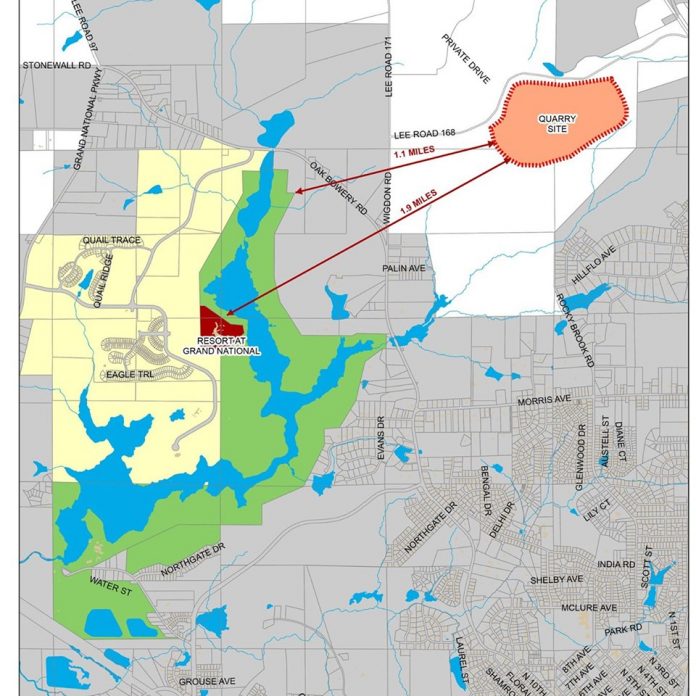 During a specially called meeting held at City Hall last Friday, community homeowners and business owners were invited to a hearing in regards to a proposal by Creekwood Resources for a quarry site located 0.6 miles from the intersection of Lee County Road 168 and US Highway 431.
“The purpose of this meeting is to provide information about what is happening and where we are in the process,” said City Attorney Guy Gunter in his opening statement. “A place where rocks are dug out of the ground and is essentially an open-pit mine where products are produced for construction and building industries.”
According to Gunter, the Opelika area was chosen as a proposal site because of geographical reasons, proximity to a major highway for rock transportation and the projection of the quarry site being outside of city limits, eliminating any issues a quarry operator may face in regards to city zoning permits.
Following the plan of the projected site, an engineering firm out of Montgomery has established further steps in terms of development. The plan has since been developed and Creekwood Resources has applied for state permit(s) through the Alabama Department of Environmental Management (ADEM). During this process, it takes two permits to operate a quarry, a water permit and an air/pollution permit.
From information supplied to ADEM, Gunter addressed the file records.
“The quarry will employ 20 individuals from Lee County and surrounding areas. The hours of operation will be from 7 a.m. to 5 p.m. on Monday through Friday as well as on Saturdays from 8 a.m. to 12 p.m. However, other hours may include 24 hours, 7 days a week depending on the facility and demand for rock,” Gunter said.
The quarry site is expected to operate for 50 or more years. Once production reaches full capacity, the mining operation will have an average of 60 trucks per day entering and exiting US Highway 431.
Opelika citizens and council members expressed their concerns over the quarry with the reasoning of environmental impacts such as dust and air quality, noise and vibration and possible damage to local drinking water. Gunter explained that ADEM will primarily listen and respond to concerns addressed towards air pollution and water resources. Citizens have 30 days from the date of publication, in this case, until Feb. 20, to address any comments and concerns. Written comments and concerns to ADEM are encouraged to be personal and as technical as possible in relation to the prospective site and impacts.
Dena Little, Storybook Farms founder, expressed her concerns over the projected site as Storybook would be fewer than 1,000 yards from the quarry. Storybook has been a source of hope for more than 18 years for kids facing challenges in their daily lives by providing positive relationships between human and animal. “The proposed quarry is going to replace our ‘hope on horseback’ (slogan) with doubt and that’s going to come in a lot of forms, and it’s going to come a zillion times,” Little said.
Opelika City Schools Superintendent Dr. Mark Neighbors expressed his concerns not only for the citizens of Opelika, but the students.
“I assure you we will do everything we can to protect the children,” Neighbors said.
Before Feb. 20, concerned stakeholders and Opelika citizens may file a written request with reasoning to ADEM for a Public Hearing. For more information and an example of a written statement of concern, citizens are encouraged to visit opelika-al.gov.
Publisher’s note: A printed sample letter can be found on page B16.