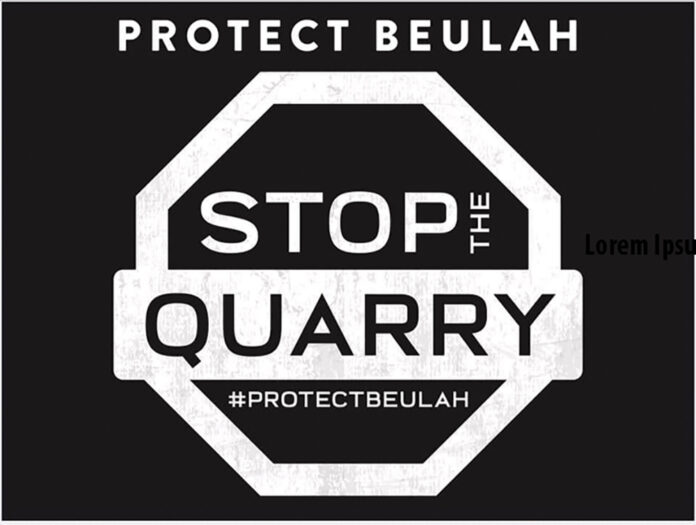 Although no action was taken, the commission again discussed the potential quarry in Beulah at Monday night’s meeting.

The commission previously voted to approve a resolution opposing the quarry, but leaders of a movement against the quarry, Tara Brumfield & Danielle Ritch, wanted to check back in.

“The main reason that I’m here is to make sure that you understand that we are still in this fight, that we haven’t given up as a community,” Brumfield said. “I know that you only see me here at these meetings, and Danielle here, but we’re not here just for us. We’re here for all of the other ones who live in our community.”

Probate Judge Bill English said he is watching and the quarry has not applied yet for Alabama Department of Environmental Management permits.

Sheila Eckman, District 1, reminded the two that despite the many reasons residents may not want a quarry, the only thing ADEM will listen to is concerns with the air and water.

Brumfield asked if the county would ask the cities of Opelika and Auburn to oppose the quarry as well.

Eckman encouraged the two women to seek out help from the cities of Opelika and Auburn on their own by going to the councils.

“They can pass a resolution, just as we did,” she said.

The council member also suggested Brumfield remind the Auburn City Council that the city gets some of its water from that source as well.

“We don’t need another quarry in this county,” Brumfield said. “I believe we’ve had our share of quarries in our county. It’s time for money to be set aside and let’s start worrying about the people and the residents of this county and how it affects them.”

A resident of Opelika spoke before the commission on a different order of business to complain about the Loachapoka quarry.

Brooke Burks said that her godmother lives near the Loachapoka quarry and said that she must put up with the sounds of blasting at all times of the day and night.

“It’s just really unfortunate that the residents in that area have to deal with this and have dealt with this for however many years that quarry has been there,” Burks said. “I don’t know at this point if there’s anything that could be done for the residents there.”

Even if nothing can be done for her godmother, Burks said she is opposed to more quarries in Lee County and wanted to share her godmother’s experience as an example of why a quarry would be a negative.

“I wanted to continue being adamantly opposed,” she said.

– Leiland Williams requested help from the commission with a portion of Lee Road 110 in District 5 that is not maintained by the county. The commission said that the county would need to reabsorb the road and completely re-do the road portion that is non-maintained, which is a cost to the county. The road was originally built by a private developer and is not up to code, said Justin Hardee, county engineer.

– The commission tabled a transfer of retail beer and retail table wine license application for Corner Store until Commissioner Bill Ham is present.

– The commission held a public hearing on right-of-way vacation on Lee Road 179 but tabled the vote until Commissioner Bill ham is present.

– The commission set a work-session before the next commission meeting to discuss the Fiscal Year 2021 budget so it could potentially be passed at the next meeting.