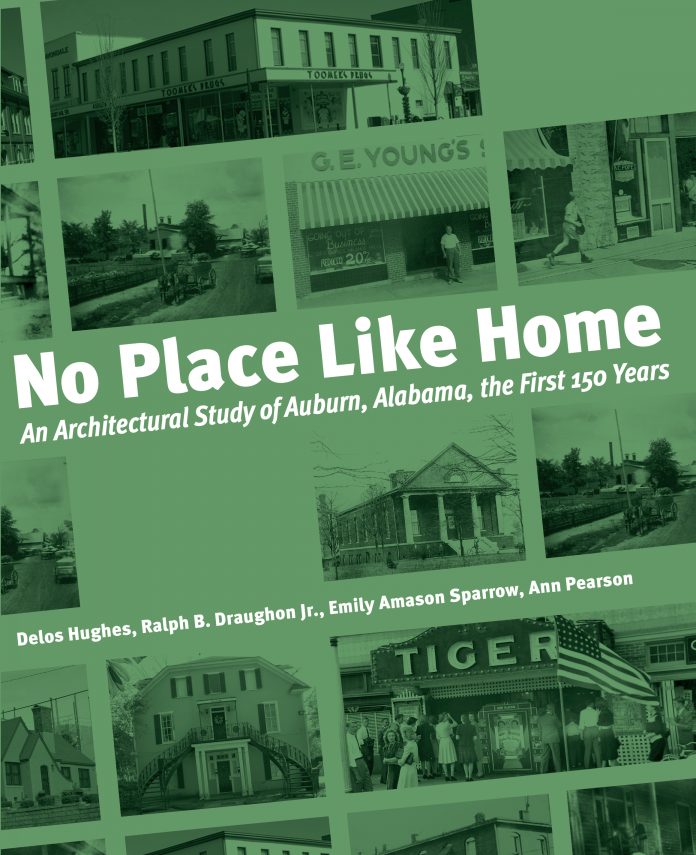 Auburn is well known as a college town and as a historic Southern village in central Alabama. The architecture that presently constitutes Auburn’s built environment deserves the same level of recognition. From structures on the campus of Auburn University to historic churches and other buildings across the town, Auburn’s architectural record is worth celebrating and protecting.
In “No Place Like Home: An Architectural Study of Auburn, Alabama,” a companion volume to “Lost Auburn: A Village Remembered in Period Photographs,” co-authors Delos Hughes, Ralph Draughon Jr., Emily Sparrow and Ann Pearson highlight the buildings of Auburn that are distinguished by age, celebrated residents, distinctive design and historical importance. The architectural character of Old Auburn lives on in the enduring structures found throughout the city.
Anchored by a strong sense of place, No Place Like Home will inspire readers to a greater appreciation of the shared past that connects everyone through historic homes and meeting places.
“Many of the buildings discussed or talked about in the book are at risk for demolished or taken down. When I was growing up here in Auburn … you didn’t see many two-story buildings, and definitely not three-story ones,” Hughes said in an interview with the Observer about No Place Like Home. “The possibility of those being gone is what motivated us (book authors) to compile all this (information) together.”
Hughes is emeritus professor of politics at Washington and Lee University, and continues to research architectural history subjects. Draughon Jr. serves on the Alabama Historical Commission and the board of directors of the Alabama Trust for Historic Preservation.
Sparrow was an instructor at Auburn University from 1996 to 2006 and served as chairwoman of the city of Auburn’s planning commission from 2010 to 2014. She is also a member of the Cemetery Preservation Alliance and the First White House Association. Pearson is thelongtime president of the Auburn Heritage Foundation. She led the successful effort to move the imperiled Nunn-Winston house to safety, and she directed the rescue from neglect of both the white and black cemeteries of early Auburn.
Once released, the book will be available at most major and local book retailers, Amazon and www.newsouthbooks.com/noplacelikehome. Hard-cover copies are $32.95 each.