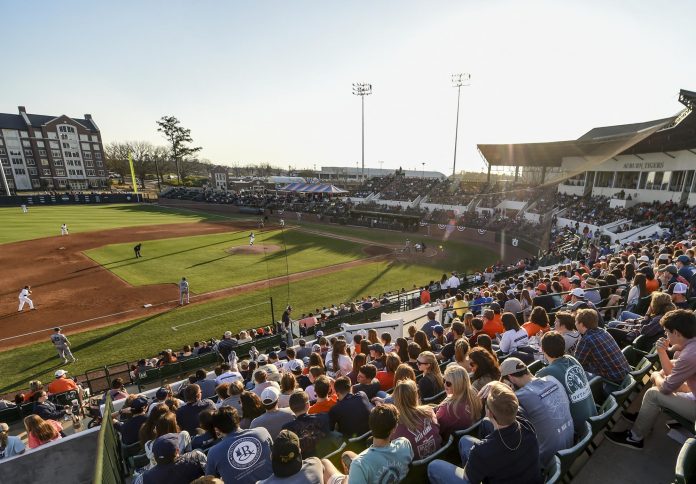 By Kevin Scarbinsky
Special to the
Opelika Observer

They did it for Rod. For Rod and Paula. For Hal Baird and Bo Jackson, Frank Thomas, Tim Hudson and Gregg Olson. For anyone and everyone who’s cared about and contributed to Auburn baseball through the years.
Twenty-two years after their last trip to the College World Series, the Tigers are headed back to Omaha because of course they are. Because no team has faced more adversity and handled it with more grace. No team has had its heart broken in more places and found more strength in those broken places. No team has overcome more insult, injury and tragedy, and no team deserves to celebrate more.
If ever there was a time for crying in baseball, this would be the time for tears of joy, and this would be the team.
Auburn is going to the College World Series for the first time since 1997 because the Tigers beat North Carolina for the second time in three days Monday – for the second time this spring – in the Sweet 16.
That’s what they call it in basketball, where Auburn whipped up on Carolina by 17. In baseball, this round of the NCAA Tournament is known as the Super Regional, where the Tigers wiped their feet on the Tar Heels by scoring 13 – in the top of the first inning.
Two decades and change of frustration. One woulda coulda shoulda Super Regional under Butch Thompson a year ago and a gut-wrenching Regional the year before that. It all ended in that merry-go-round of an opening statement. Before North Carolina could step into the batter’s box, Auburn had sent 15 men to the plate, banged out 11 hits and scored 13 runs against four helpless pitchers.
To borrow a phrase from another memorable Auburn occasion, the Tigers won the Super Regional in the most unbelievable fashion you will ever see.
The final score was 14-7. The final verdict was delivered right off the bat.
There would be no game-tying RBI triple one strike away from victory, no fly ball bouncing off a glove and over the fence, no tying and losing runs scoring on one wild pitch. Auburn left no doubt which team was the better team, the tougher team, the stronger team, and the Tigers did it on North Carolina’s home field a week after dismissing Georgia Tech in the NCAA Regional on Tech’s home field.
The only thing that could’ve made it better would’ve been hearing Rod Bramblett describe it and revel in it.
Bramblett was the longtime voice of the Tigers, even longer in baseball than football and basketball. He and his wife, Paula, lost their lives in a car accident in Auburn two days after the Tigers exited the SEC Baseball Tournament in May. A memorable voice was silenced, and a family still mourns.
Rod was there in Minneapolis in April to experience Auburn basketball’s first trip to the Final Four. You know he’ll be there in Omaha in spirit just as he was in Atlanta and Chapel Hill.
This spring has been the best of times and the worst of times for the Auburn family. There’s been a Final Four and a College World Series wrapped around the shocking loss of the Brambletts, a killer tornado and the tragic death of an Auburn police officer killed in the line of duty. Each of those life-changing events has been inexplicable in its own way, and each has brought out the best in the family.
Thompson has been the right man for the job since he got the job to lead Auburn baseball in October of 2015, but the honest and humble way he’s handled everything this team has been forced to experience has been extraordinary.
There’s another word that captures that quality. It’s authentic, and it can take you a long way with the right group of young men. In this case, it can take you all the way to Omaha.
About Scarbinsky:
You may know me as a former sports writer for The Birmingham News and AL.com, as a radio and TV regular. You should know this:
I believe in the passion of sports, the power of the written and spoken word, the people of Birmingham and Alabama.
These beliefs, my roots, have brought me from the Iron Bowl, Final Four, World Series and more to an exciting new place in my career. Consider me a media and communications consultant, a freelance writer, a storytellerfor hire. If you have a story to tell and need someone to tell it, just say the word.
www.kevinscarbinsky.com.