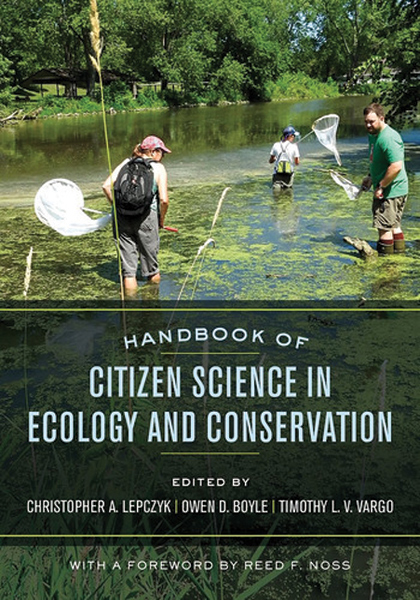 By Teri Greene
Special to the
Opelika Observer

An Auburn University researcher and faculty member is the lead editor of the newly released Handbook of Citizen Science in Ecology and Conservation, the nation’s first comprehensive guide for both professional scientists and citizen scientists—avid science enthusiasts within communities who carry out essential, hands-on work for research projects.

Editor Christopher Lepczyk, a professor of wildlife biology and conservation in Auburn’s School of Forestry and Wildlife Sciences, said the handbook aims to provide tools to citizen scientists to help them start or become involved in projects. While the focus is on ecology and conservation, the lessons in the book are applicable to most citizen science projects, he said.

“This is very much a book for practitioners and the public, as much as it is for professional scientists,” Lepczyk said. “Our goal was very much oriented at creating a book that can be read and used by both an interested lay person as well as the scientific community. Thus, we worked to present the concepts of citizen science in an easy-to-read and user-friendly manner, without a lot of jargon or citations.”

The idea for the book came about years ago in Milwaukee after Lepczyk and two close friends and colleagues—Tim Vargo and Owen Boyle, co-editors of the book—worked on a citizen science project focused on migrating birds that used public parks as stopover locations.

“We discussed how valuable it would be to have a handbook that described how to carry out a citizen science project,” Lepczyk said. “Although there were papers and some short technical reports, no handbook existed.”

After holding a symposium on citizen science at the Ecological Society of America meeting, the three proposed the book to the University of California Press, which accepted.

Lepczyk began work on the handbook along with Boyle, chief of species management at the Wisconsin Department of Natural Resources Natural Heritage Conservation Program, and Vargo, manager of research and community science at the Urban Ecology Center in Milwaukee.

Rather than using the terms “scientists” and “non-scientists,” Vargo said he refers to the two categories as professional scientists and community scientists because, “in the end, we are all contributing to science.

“Citizen science provides collaborative opportunities between the two groups, as each group brings particular talents and support,” Vargo said. “The very first scientists were citizen scientists, and then we created the university system where most professional scientists became trained. But outside the auspices of the ivory tower, people have been contributing so much to our understanding of how the world works.”

He cited the names of some familiar pioneering “citizen scientists,” including Charles Darwin, Thomas Jefferson and Increase Lapham.

In the handbook, the editors aim to tear down some long-standing myths: that only professional scientists can engage in scientific research; that community involvement decreases the integrity of science; and that science is outside the grasp of the community, Boyle said.

“We worked hard to bring together a group of citizen science practitioners with many decades of experience in the full diversity of citizen science projects in conservation and ecology that vary in scale, geography, duration, organizational support and level of volunteer involvement,” Boyle said.

“I hope the handbook not only inspires new citizen science projects on under-studied species or in under-surveyed areas, but that it can also provide fresh ideas and approaches for existing projects. Citizen science is crucial for scientists’ understanding of the natural world. And for citizen scientists, it’s just plain fun.”

The handbook draws from the experience of professional scientists from universities, government agencies and non-governmental organizations to present a set of best practices and important processes to consider when starting or strengthening citizen science projects.

Citizen science expert Rebecca Christoffel, sole proprietor of Christoffel Conservation, said the volume is an important addition to the literature in the field, not only for scientists who are developing citizen sciences projects, but also for the individuals involved in those projects.

“It really lays out the nuts and bolts of designing, implementing and assessing a citizen science program,” Christoffel said, who plans to use the book in a class she is developing for naturalists involved in citizen science. “Each chapter is authored by individuals who have expertise in the topic discussed.”

Dean Janaki Alavalapati of Auburn’s School of Forestry and Wildlife Sciences applauded the efforts of Lepczyk and his team.

“Citizen science projects have always been valuable and are becoming more and more common,” Alavalapati said. “With the publication of this handbook, Dr. Lepczyk and his co-editors have provided a much-needed, comprehensive guide for both professional scientists and the citizen scientists who contribute so much to research.”

Handbook of Citizen Science in Ecology and Conservation is available on Amazon, Barnes & Noble, Walmart and other retailers.

Beulah Seniors Give Back to Youth