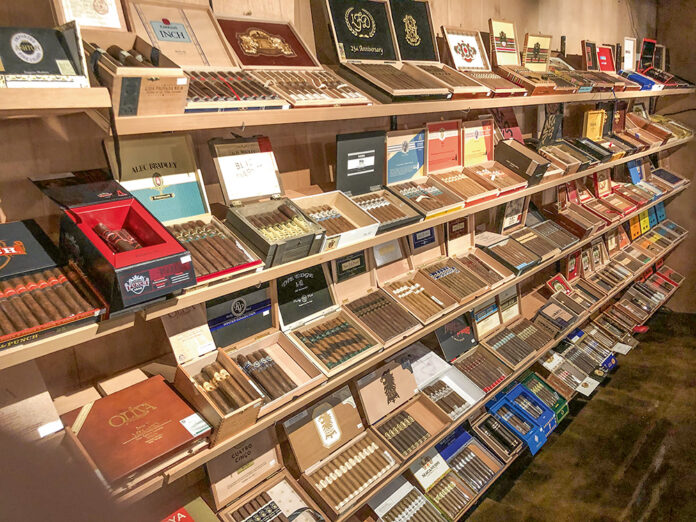 Z&Z Cigar Co., a cigar lounge, opened earlier this year at 108 S 9th St. The lounge opened in September in a location that used to be a bakery.

What space used to be a kitchen now accommodates a walk-in humidor, and the rest of the space is furnished in typical cigar-lounge style: leather chairs, leather couches and a poker table. There is also a bar that is currently stocked with airplane bottles and beers, but which will fill out with more options as the business grows.

Kamal Ali and his brothers, who own the Z&Z Tobacco and Spirits stores in Auburn, wanted to open a cigar lounge, as they saw a lot of people interested in the small humidor at one of the stores. However, they encountered some obstacles in Auburn. “[In Auburn, there are] certain restrictions as far as drinking and smoking in one area,” Ali said. “This standalone building was something that caught our eye, and we thought it would be a perfect opportunity to get something rolling. There’s really nothing like this around here.”

Although it is a unique business in the Opelika area, there have been fewer patrons than expected in its first months. “[We’ve had a] slow start because of COVID, but local people that are here enjoy coming here, and I think it fits with this little historic area,” Ali said. He anticipates that there will be more traffic into the lounge once people get comfortable sharing an indoor space with each other again, and he added that there are some cigar connoisseurs in the area.

“They’re just looking for somewhere to sit and smoke and not have to worry about the smell,” Ali said. “I know my wife would not allow me to smoke inside the house or in the garage. [This is] a nice place to smoke a cigar and watch some sports.”

Ali said that there was an event Z&Z did in collaboration with Red Clay Brewery and a cigar company, at which event those who bought tickets got to try some pairings of different cigars and craft beers. Each $40 ticket included a six pack of craft beer and a box of cigars.

“It was a nice little get together. We hope to do more of those planned events to get people more involved,” Ali said.

One kind of event in the works is a poker night with prizes for the top finishers. Participants would play all night, puffing on selections from the walk-in humidor and sipping on drinks from the bar, and the winner would take home, for example, a variety box of cigars.

Ali added that they plan to expand the lounge with an outdoor patio, which could be booked for private events. Until then, the indoor portion can serve that purpose, but it is most often open for anyone of legal age to enjoy a drink and cigar.

Z&Z Cigar Co. is open from 2-9 p.m. on Tuesdays, Wednesdays and Thursdays, from 2-10 p.m. on Fridays and Saturdays, and from 12-6 p.m. on Sundays. For more information about the lounge and its upcoming events, visit its Facebook page (Z&Z Cigar Co.).