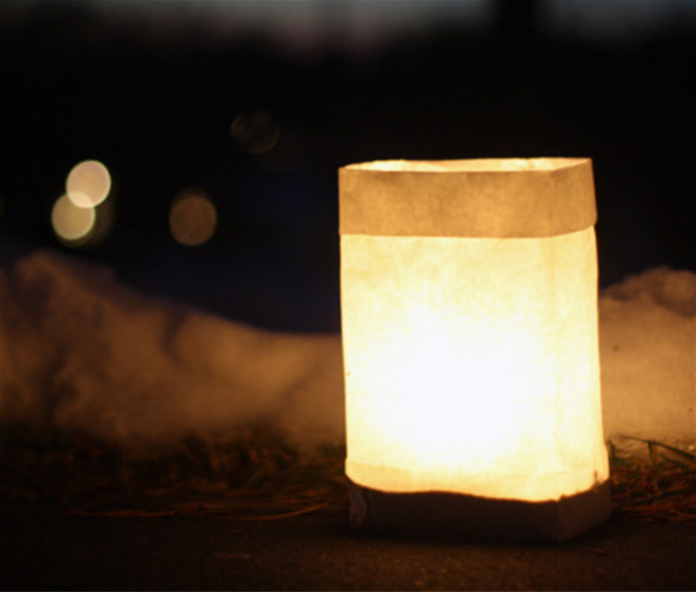 Collinwood residents will continue their Christmas gift to the community with the 52nd annual Luminaries on Dec. 13 from 5 to 9 p.m. More than 1,500 flickering candles in sand filled bags line the winding, sloping streets in the Collinwood neighborhood, symbolizing the guiding of the Holy Family on their journey to the manger where Jesus Christ was born.
Along the candlelit drive, homes are decorated for Christmas, signs display Bible verses, and scenes throughout the neighborhood tell the Christmas story. Living scenes feature shepherds, wise men and angels and at the end of the path, a live nativity scene resonates the message of Christmas.
Rick Lane of the First United Methodist Church of Opelika has worked many years with youth to participate in the nativity. Live animals are often included in the nativity scene.
Fifty-two years ago, the first Collinwood Luminaries included only a few houses on East Collinwood. In 1966, Mrs. J.R. Fuller of the Twilight Garden Club suggested the idea to the club after seeing luminaries in Europe. The holiday tradition of luminaries originated more than 400 years ago in Mexico.
The following year, with 15 families living in the neighborhood at the time, the residents undertook the project. The late Aileen Samford and Lucy Salter were instrumental in organizing the event.
During the first few years, the residents of East Collinwood used an assortment of bags and candles. After West Collinwood Circle and Collinwood Street were added to the subdivision, the event became more organized. Paper bags and candles were ordered in order to be consistent throughout the pathway.
“The neighborhood has always seen the luminaries as its gift to the community,” explained Martha Hill, a Collinwood resident who has participated from the beginning when the first candles were lit.
“It makes Christmas special for children,” Hill said, whose children grew up looking forward to the annual family event. She served as chairman several times during the years and feels the event keeps the neighborhood close.
In 1984, Hill, along with another neighbor, visited Southern Living magazine with information and pictures of the luminaries. Southern Living sent writers and photographers to cover the event and neighborhood party, which was held at Jane and Jacob Walker’s house. The following year, the event and recipes from the party were featured in the Christmas issue.
The preparation in setting up the candles involves the entire family. Yards are raked and neatly groomed. Children in the neighborhood assist older residents.
A few days before the event, sand is delivered to several locations around the neighborhood. Three to four inches of sand is placed into a plastic bag, then into a paper bag, with the top folded down two inches to add rigidity.
The day of the luminaries, bags are placed 20 inches from the curb and spaced evenly for uniformity.
City sanitation and power employees assist in getting ready for the event by cleaning streets and turning street lights off.
The Collinwood tour is also supported by the Opelika Mayor and City Council, Public Works Department of Opelika (ESG), Opelika Power Services, Opelika Police Department and Boy Scout Troop 858. First United Methodist Church Youth group provides the characters for the live scenes along the way.
Luminaries begin at 5 p.m. at the corner of 10th Street and Collinwood. Motorists turn off headlights as they slowly drive one way through the neighborhood and end at McLure. The tour is free.