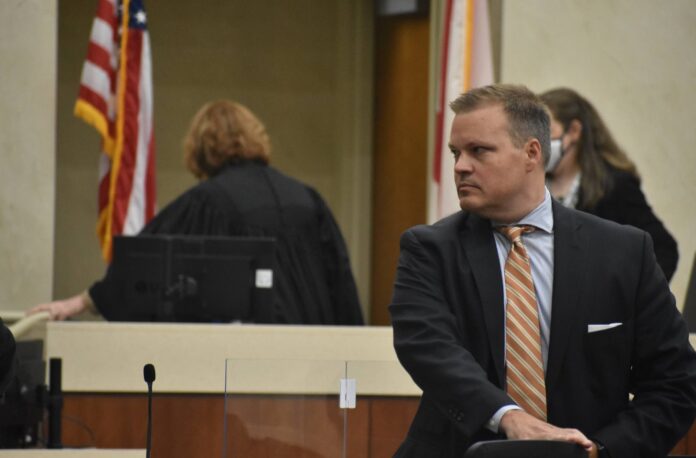 By Hannah Lester and Wil Crews

Hughes turned himself in to the Lee County Sheriff’s Office on Nov. 8, 2020, after being indicted with seven ethics charges.

Included are ethics, theft and perjury charges: using his position for personal gain, hiring his children illegally on state funds and conspiracy of theft of a pickup truck in Chambers County.

During opening statements of the case, Prosecutor Jasper Roberts said that after Hughes’ election, he created a party atmosphere at the office, acted inappropriately with one of his female assistant district attorneys, used public funds to pay attorney fees to settle a lawsuit with that same assistant district attorney after she was forced to resign and committed perjury against the state ethics’ commission.

Roberts said that the jury would see a lot of evidence because, “as the state, we have the burden of proof … and that burden is beyond a reasonable doubt. We talked a lot about it yesterday and it’s a high burden.”

Defense Attorney David Vickers said that Hughes is innocent and has cooperated with all investigations.

“Did Brandon Hughes have a reason to lie?” Vickers asked. “Defendants that are criminals do not cooperate.”

“It felt a little bit like ‘Mad Men’,” she said. “A lot of drinking in the office. It was probably more relaxed than it should be. There were electronic gaming systems. It was kind of frat house-ish at times.”

Additionally, she said that after taking over in November, she has corrected the behavior and no longer allows drinking in the office.

Defense Attorney Richard Benjamin White Jr. clarified during his questioning of Ventiere, that it was not illegal for Hughes or other employees to drink in the office. Moreover, he maintained that the drinking was not regular and did not affect Hughes’ ability to do his job.

“How many victims complained about his ability to represent victims in this county,” he asked. “… Zero.”

Ventiere also testified that Hughes had entered into an inappropriate relationship with assistant district attorney Taylor-Lee Stokes, who was hired in October 2017.

“I was very concerned, based on observations and based on other interactions with people in the office, that an inappropriate relationship had (started),” she said.

Ventiere testified that a member of custodial staff walked in on what she described as an “intimate or inappropriate event between Mr. Hughes and Mrs. Stokes. The lights were out. Mrs. Stokes slammed the door, had lipstick smeared on her face. Stokes said ‘don’t tell anybody,’ something along those lines,” to the janitorial staff member.

This incident allegedly occurred on Feb. 8, 2018, according to Ventiere and she testified that she texted Hughes, asking to set up a meeting with him to discuss it. She testified that he sent back, ‘am I going to jail?’

“I thought it was strange at the time,” she said.

During their meeting, Ventiere confronted Hughes with the rumor, which he denied and she recommended Stokes be fired.

“He was concerned that terminating her would only confirm they were having an affair,” she said.

Ventiere later held a meeting with Stokes and gave her the option of resigning or being fired. Stokes chose to resign.

A lawsuit that Stokes later filed, and was settled, stated that she has said Hughes acted inappropriately toward her.

White maintains that the alleged affair is only an allegation and since it was settled, a jury or judge never convicted either party. Therefore, it remains something that cannot be proven against Hughes.

The case will begin again at the Judicial Center Thursday morning at 8:30 a.m. with more witnesses testimony.