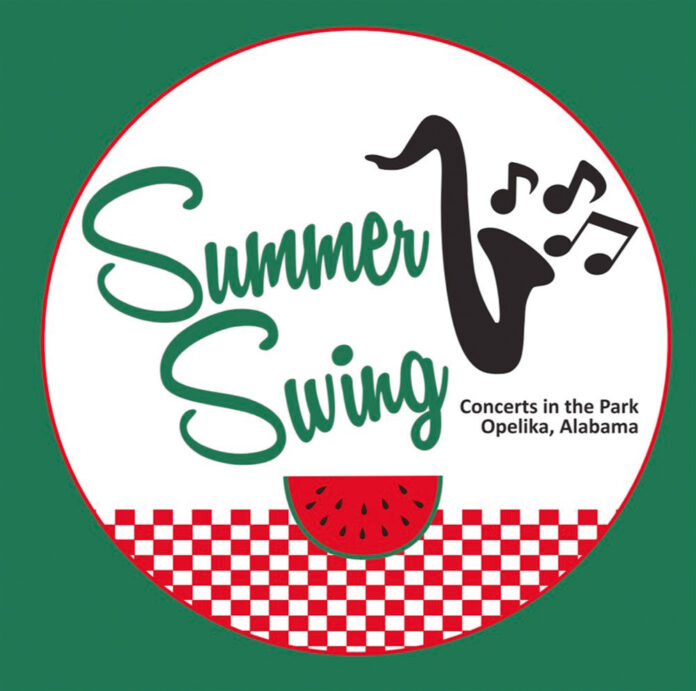 CONTRIBUTED BY
OPELIKA PARKS AND REC

The Opelika Band Boosters will prepare hamburgers and hotdogs for a nominal fee from 6:15 to 7:30 p.m., ideal for a family picnic. South State Bank of Opelika will provide complimentary lemonade during the concerts.

The Rocky Brook Rocket, a vintage train with a long, rich history has been restored and will be back on the tracks for complimentary rides.

Come out early. Bring the whole family, a quilt or lawn chair and relax on the bank of Rocky Brook Creek for an evening of musical fun, fellowship and relaxation. For more information, please call (334) 705-5560 or email LChesser@opelika-al.gov.

The event would not be possible without the many community partners:

Legends entertainer Bill J. Brooks brings Elvis and friends to life for Elvis fans all over the southeastern United States. Brooks  is an award-winning tribute artist doing the wonderful music from the 5 50s, 60s and 70s featuring Roy Orbison, Johnny Cash, Conway Twitty, Tom Jones, Neil Diamond and of course, the “King of Rock n’ Roll” Elvis Presley. Elvis and friends is sure to please all music fans as it is entertaining, fun, moving and very family-friendly.

The East Alabama Community Band, now in its 10th year and led by Josh Wine, will be playing a variety of marches and show tunes.

Crossroads is a six-piece variety band that covers many country and classic rock hits. The band performs selections from artists such as Fleetwood Mac, Linda Ronstadt, REM and The Eagles, as well as Carrie Underwood, Sugarland and Martina McBride. Crossroads produces smooth vocal harmonies and provides audiences with a unique, varied and entertaining experience. More info can be found at facebook.com/auburncrossroadsband.

Formed right on Toomer’s Corner in 1985 and led and inspired by the late great Opelika native, Robert Orr, Kidd Blue continues to bring their “New Old Soul” to parties and events throughout the Southeast. For over 37 years, this horn-driven group of local professionals has been delivering its eclectic mix of soul, Americana, R&B, Motown and rock Classics in the styles of Marvin Gaye, Sam & Dave, Al Green, Van Morrison and many others. Do not miss this rare opportunity to experience Kidd Blue in an outdoor public performance. Follow the band on Facebook, Instagram and Twitter — @KiddBlueBand.

This energetic group plays it all … oldies, pop, rock and dance music. Audience participation in encouraged. Join the “Monkey Park dancers” on the grass around the stage as they dance, blow bubbles and have a great time.

This will be Muse’s 32nd  year on the Summer Swing bandstand. Easy listening, vocal-oriented acoustic soft rock played as only Muse can. Together for 44 years, Muse will perform fan favorites by artists such as the Eagles, Beatles, CSN, James Taylor, Van Morrison, Little Big Town, Jason Isbell and more.

The James Brown Trio is a Southern Gospel group that will have your toes tapping and heart-stirring to songs from the past as well as current tunes that are soon to be classics. The namesake (James Brown) started the group 20 years ago with Charles Story and Adam Traylor but since the deaths of Brown and Story respectively, the trio has continued the tradition of good ol’ Southern Gospel music with new members. Today the trio consists of Adam and Teel Traylor, as well as Kevin Webb from Auburn. You will not want to miss this group’s harmonious sounds beneath the beautiful summer night sky.

Richard Murray and Rusty Brown play country, rock and easy listening. Recently they have been working with songwriters out of Muscle Shoals and working on a new CD. You can catch them playing around Auburn/Opelika and Lake Martin area playing weddings, corporate events, private parties and festivals. Find them on Facebook. Music makes the world go round.

Jen and  Rob Slocumb are living their musical dream. While building their family, they have continued to write and play music, producing about a dozen albums and touring around the country and the world. And their work has not gone unnoticed. Some of the most influential and well-respected music critics have paid tribute to the duo.

They have been listed and featured in Billboard Magazine, USA Today, AOL Music, XM Satellite Radio and Performing Songwriter. Their songs have received multiple awards, including Best Americana Album of the Year by Just Plain Folks Awards, their Christmas Lights recording was selected as one of USA Today’s Top Holiday Albums, their cover of “Nothing’s Gonna Stop Us Now” was selected as one of Billboard Magazine’s Top 10 Cover Songs, and their recordings have been featured in several made-for-TV movies.

Back to School Bash

Enjoy a final concert as the community bids  summer farewell.