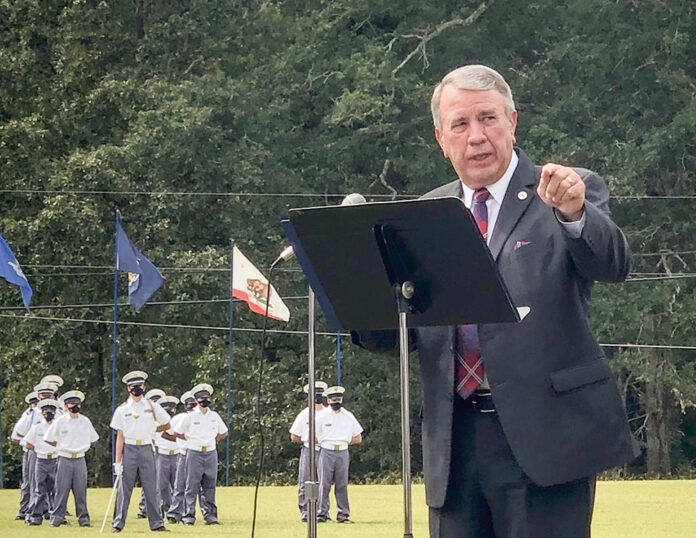 Southern Preparatory Academy, a military academy in Camp Hill, Alabama, held a First Responders Parade on Thursday, Sept. 10. First responders from surrounding areas, including Opelika, were invited to attend the parade meant to celebrate their services.

Lt. Colonel Jared Norrell, the president of Southern Prep., was serving in the military on 9/11 and was sent to Afghanistan within a month of that infamous date. Norrell commented on the process of educating Southern Prep.’s students about 9/11 (it is important to remember that anyone under the age of 19 was not alive on 9/11): “I think it’s very similar to my generation and what we learned about Pearl Harbor. It’s such a significant event in the history of our country,” he said. “The boys are very interested and fascinated by the event, and they take it very serious.”

Parades such as this one at Southern Prep. are ceremonial, but they come from practical origins.

“The ceremony goes back, really if you trace it all the way back, to medieval times,” Norrell said. “When soldiers used to fight in close formation, they would protect each other and they would maneuver on the battlefield. At one point these were, in essence, battle formations.”

Norrell said that the parade is a way to celebrate not only the cadets on the field, but to celebrate all the visitors and guests who are on the campus.

The ceremony began at 10 a.m. with the Southern Prep. cadets marching down onto the field where they performed the parade, their staccato steps accented with the beating of drums from a unit near the back of the procession.

Alabama Speaker of the House Mac McCutcheon was invited to speak to those assembled, and he trooped the line (a now-ceremonial inspection of the units’ preparedness for battle) following the cadets’ march onto the field.

The National Anthem was then played, followed by a moment of silence, the firing of the Southern Prep. Cannon and the playing of TAPS.

McCutcheon, who is a United States Army Veteran, then addressed the students and crowd (this speech was the last element of the parade except for the Pass and Review of the cadets). “When our country was attacked on 9/11, 2001, we were all in shock,” he said. “Tragedy. People’s lives were being lost. Destruction of one of our major cities. But the destruction was to this country. The first responders were on the front lines. While people were running away from the danger, the first responders were running to it.”

McCutcheon promised to do what he can in his role to support the police and to conserve Alabama’s values, which values he said are under attack.

“I had a great career in law enforcement, and there were some times, on some calls that I took, where I actually laid down my life in such a way to try to help someone,” he said. “Thank goodness I was still able to walk away from that instant alive. But yet, that’s the heart of a first responder. They will sacrifice themselves for someone else.”

He then directly addressed the cadets on the field, telling them that the values they learn at Southern Prep. should stay with them for life, namely discipline and respect for law and order. He urged them to always be grateful that they got to receive the education they did in America.

“Your generation, this class, here at the school now, your generation, will either see the benefits of standing strong for America, or you will see the demise of this country,” McCutcheon said.