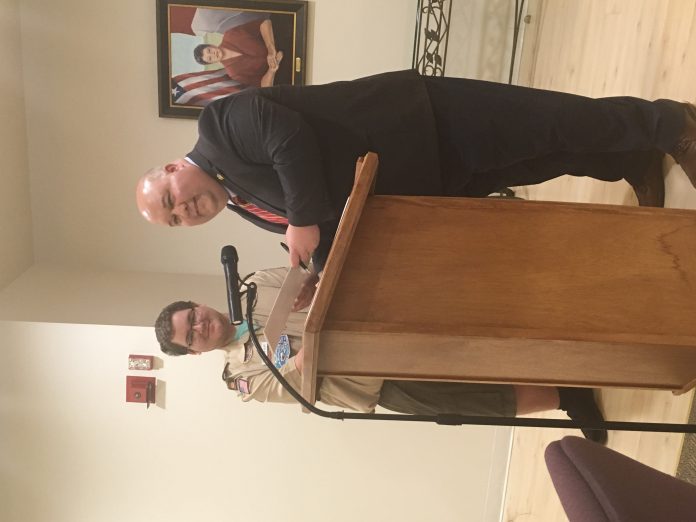 Local student Austin Elliott was recognized for achieving Eagle Scout status during last Tuesday’s City of Smiths Station city council meeting.
For his Eagle Scout project, Elliott selected to beautify Smiths Station High School’s softball fields and plant a Japanese maple near the dugout in honor of classmate and former athlete Lexi Webb.
During the meeting, Mayor Bubba Copeland read a proclamation citing Elliott’s accomplishments and gifted him with a city challenge coin and replica of the Alabama state flag.
“We thank you and we’re very proud of you for not only representing the Boy Scouts of America and the City of Smiths Station. I personally am very proud of you too,” Copeland said.
An ordinance lowering the speed limits from 45 to 35 mph on Lee roads 248 and 430 and 35 to 30 mph 296 was passed by the council to address issues of speeding and safety within the city limits.
Place 2 Councilman Morris Jackson also expressed his gratitude to council members and Smiths Station citizens for their efforts during last Saturday’s MLK Clean Up Day, which yielded more than 3,000 pounds of trash collected.
In other business, the council:
approved a resolution allowing electronic business transaction fees for municipal services to be passed to consumers. The city recently upgraded its payment systems allowing for customers to pay with credit and debit cards.
The Smiths Station City Council meet on the second and fourth Tuesdays of each month. During the coming months, the first Tuesday’s work session will begin at 5 p.m. E.S.T., second Tuesday’s will begin at 5:30 p.m. E.S.T., followed by their regular meeting at 6 p.m. E.S.T.
Meetings are held in the council chambers of the Smiths Station Government Center, which is located at 2336 Lee Road 430. For more information, call 334-297-8771 or visit www.smithsstational.gov.