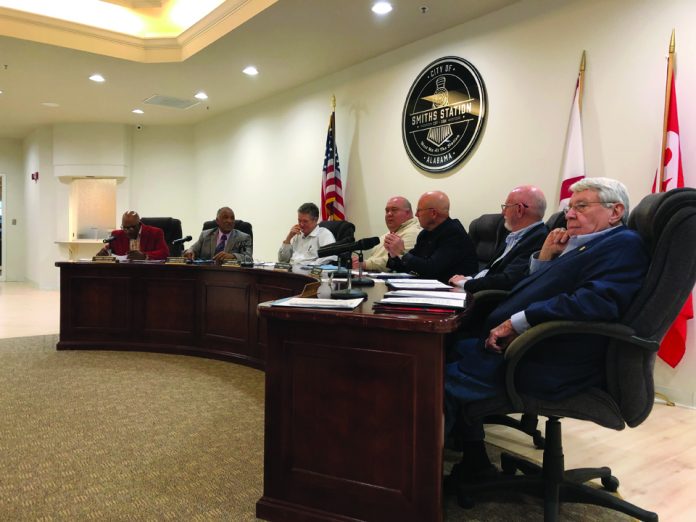 Members of the Smiths Station City Council voted unanimously to reappoint William Spear and Richard Terry to the city’s planning commission last Tuesday night.
Spear’s new term will expire Dec. 31, 2023, while Terry’s will expire a year later on Dec. 31, 2024.
“Both of these (men) have been great (commission) members and play vital roles,” said Mayor F.L. “Bubba” Copeland.
The council also approved a resolution to enumerate next year’s holidays and dedicated days off for city employees. According to City Clerk Scott Johnston, the city of Smiths Station’s calendar will mirror Lee County’s schedule, which rents a space within the Smiths Station Government Center.
Before adjourning the meeting, Copeland reminded the public about the city’s Christmas tree-lighting ceremony, which was held last Thursday evening.
The council’s next and final meeting of 2019 will be held on Dec. 23 because of the Christmas holiday.
The Smith Station City Council regularly meets on the second and fourth Tuesday of each month with a work session starting at 5:30 p.m. E.S.T. followed by their regular meeting at 6 p.m. Their meetings are held within the council chambers of the Smiths Station Government Center, which is located at 2336 Lee Road 430. For more information, call 334-297-8771 or visit www.smithsstational.gov.