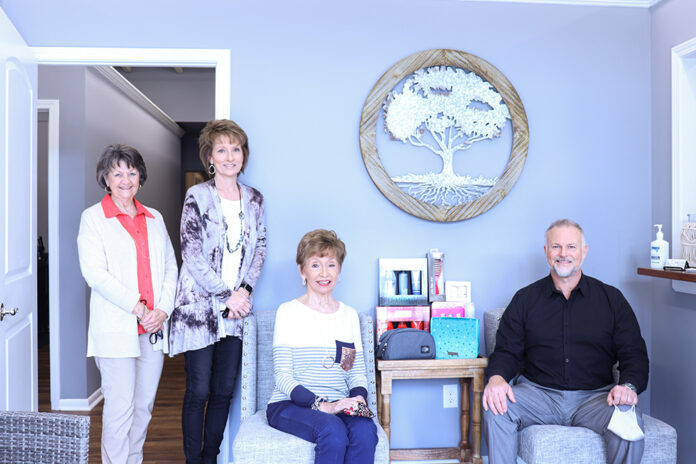 Willow Tree Boutique had its storeroom-emptying grand opening at the end of October and has already seen return customers since.

Becky Stillwell, an Opelika native, and Stephanie Kennedy, an Auburn resident, own Willow Tree, which is located in the same building as Matthew Arnold’s Salon 1010 (1010 Renfroe Ave.). The two worked together with a different boutique before opening Willow Tree.

“We had a good following already,” Stillwell said, “and we did not count our people the past Friday, but we had a place full; we had a great turnout of people.”

The boutique and salon have a mutually beneficial relationship. “I think it’s helping Matthew because people that we know that already shopped with us are getting to know him, so he’s picked up some clients from our business,” Kennedy said. “And we’ve picked up many clients from his business. When they come get their hair done, it’s kind of a one-stop shop.”

Stillwell even credits Arnold with making the boutique’s first sale, as he showed a client around before there were even price tags on the items then called the women on Facetime to get prices. He is also the reason the Willow Tree is open as early as it is, still without all the decoration Stillwell and Kennedy had planned; he told them that his clients were constantly asking to be shown around the boutique.

Willow Tree’s inventory is not the most expensive, as Stillwell said she’d rather make a lot of sales at a lower price than a few at a high price. She was quick to add that the clothes and jewelry at Willow Tree are not cheap by any stretch of the imagination.

The appropriately priced inventory is perfect for any age, and it is not specifically catered to the Auburn student demographic, as is the practice of many boutiques in the area. The stock rotates fairly quickly, even when not forced to by a surprisingly busy grand opening.

“Especially in a salon and as busy as he is—he’s got a lot of people that are coming weekly—you want to make sure that there’s something new in there for them every time that they come,” Kennedy said.

“This is a small town. You don’t want to go wherever you go, everybody’s got the same top. We’ll carry maybe small, medium, large, that’s it,” Stillwell added. “So when you see it, you’d better get it because that’s probably all we have. We like that and the customers seem to like that.”

Stillwell and Kennedy know their clientele well enough that they acquire some items not just on a hunch that they’ll sell, but because there is a specific client in mind who will buy those items. Stillwell likens it to their clients having two personal shoppers.

As COVID-19-related limitations ease up, the boutique plans to do more of the pop-up shops and fashion shows that its two owners did before establishing this brick and mortar location.

“We plan on doing, every now and then, just a Saturday for people who might not get over here during the week,” Kennedy said. “Once COVID kind of moves out, we can have snacks and a normal kind of get-together, party-type thing.”

The boutique is closed on Saturdays, Sundays and Mondays. On other days, it opens at 10 a.m. and usually closes at 5 p.m., although those hours are flexible. Stillwell is responsive to phone calls at most hours and is usually willing to open up the boutique outside of 10-5 to help a client with a purchase.

Stillwell’s cell phone number is 334-744-1910, and you can find more information about the boutique at The Willow Tree Boutique on Facebook.