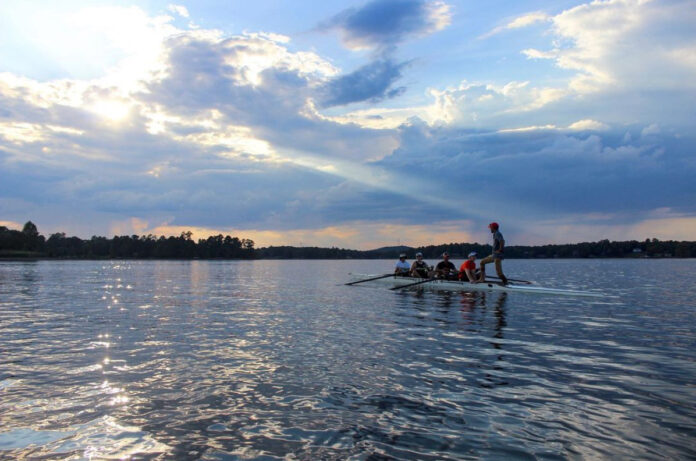 Whether it’s cold and raining or it’s hot as Hades, the Auburn Rowing Club is in the water. For years, it has competed regularly and on schedule.

The Auburn Rowing Club competed and medaled in a race called the Head of the Hooch in Chattanooga, Tennessee, in November of 2019, just four months before the onslaught of COVID-19.

Club president Nick Belvin said it was huge deal, as the club had never medaled at this particular event. It was an encouraging showing for the team, which typically consists of about 25 to 35 people, and a signifier that the club was heading in the right direction. In his wildest dreams, Belvin couldn’t have thought the race would be his last to date.

“We got crushed by COVID,” he said.

The rowing team was in the midst of its final preparations for its first spring regatta — what they call a race — when COVID-19 shutdowns began and Auburn University went fully online, effectively, and unknowingly to Belvin, cancelling the 2020 rowing season.

Normally, the team would compete year-round in about seven events each season. The fall events feature longer races, rowers twisting and turning for up to five kilometers as they travel down the river. The spring is sprint season. This is the type of rowing that most novice water sport watchers are familiar with. Picture the Olympics, where boats filled with up to eight people race down a straightaway alongside other boats. You’re either first or you’re last from there.

Practice is six days a week. However, it’s not steadfast for everyone; they stagger practice days due to limited equipment. The freshmen are eased into it and might get off easy with just two practices a week.

“Unlike a lot of college sports, we are flexible with our schedules,” Belvin said. “Most freshmen didn’t know they were going to join the rowing team when they made their [school] schedules.”

For the rest of the team, three days are spent in the water — well, in the boats that are in the water — and the three remaining days are spent working out in the campus recreation center. Two of those three rec days feature two-a-day workouts. For those who were fortunate to have not experienced these in their adolescence, it simply means two practices are happening that day and you will be exhausted by the end of it. It starts with one workout, either at 6 a.m. or 7 a.m. to allow for schedule flexibility, and those sessions are spent on the rowing machines. The afternoon part is spent lifting with fitness trainers at the rec center.

“Because we practice almost every day and some weekends, my teammates became my family,” Brewer said. “Practices were not only a great way to stay in shape, but an even better decompress from all the stresses of college and life.”

The team has a little piece of property out on Lake Hardin where it practices. The locale is about 45 minutes away from Auburn on the Alabama-Georgia line. Belvin said the beginning of the season’s practices typically focus on aerobic capacity.

“If you’re on a high-level varsity boat, one of those days out on water you’re going to be doing a 10k or 15k,” Belvin said. “It’s going to be decently low heart rate, no sprinting or anything. That’s going to really build your base.

“As we move more into the season we will start adding in more mid-range and sprint pieces. That could be 500-meter pieces, or 6 by 1k mid-range piece, up until we peak for competition. Then we will back off a little on our intensity to give people some time to recover before a race.”

However, all of that has been on hold since the spring shutdowns because “club sports weren’t given too much leeway this semester,” Belvin said.

The team was granted the ability to practice about six weeks into this year’s fall semester, but only 12 members were permitted to gather at a time, and only two one-hour long practices were allowed per week. And the season was still completely canceled.

“Now that we are slowly able to practice again, it feels great to be back,” Brewer said. “But it’s going to be a lot of work to get the team spark back. With a canceled season, team camaraderie became a top priority to maintain our current numbers and grow for season to come.”

The missed practice time and canceled competitions have made Belvin wary of the team’s viability in the future.

“There’s nobody to take over our key positions,” he said. “We have boats that need constant care, engines that need care, a 16-foot trailer that needs constant care; and not having funding or access to my rowing bank accounts to work on that stuff and keep it sound isn’t great.”

Still, Belvin said he knows “a lot of clubs that have it a lot worse than us, so I’m grateful for that.”

According to Belvin, the Auburn Rowing Club has been around since 1992 or ‘94. He has been rowing since his freshman year of high school.

“I saw [Auburn] had a team whenever I came down, and I joined up.”

A D.C. native, Belvin said he knew rowing was “really small in the South.” The nature of the sport isolates it to bigger cities that run along river bodies. But Belvin insists there are parsecs of potential for rowing to grow at Auburn.

“It’s something that once you’re in a rowing world you don’t want to leave it,” he said. “Anybody that has stuck with us for more than a month haven’t quit the club. It’s very much a family. It’s also a full body workout. It’s one the few cardio sports where you’re not working just your legs, you’re working every muscle when you’re rowing.”

Belvin went on to say that before his time at Auburn, there were rumors that either equestrian or women’s rowing would be the next varsity sport added to the university’s official lineup.

The fact that the rowing team operates without a coach may have hurt their chances.

“There has been on and off coaching through the years,” he said. “But that’s truly a shame with Auburn being such a big university and sports-oriented school. If someone were to lay their roots here, they would find a lot of success.”

Equestrian has gone on to see great success, which might have made it an even harder pill to swallow, but Belvin has remained positive. He joked that the club’s best shot at becoming an official university sport just went out the window with Gus Malzahn’s buyout.

Belvin is a junior majoring in electrical engineering, and he’s had a passion for rowing for many years now. However, he says the typical member of the rowing club is nothing like him.

“Most people who join our rowing team don’t have any experience,” he said. “It’s one of those college sports where you don’t have to have ridden to join up.”

“Going into my freshman year of college I wanted to try any and everything until something stuck for me,” Brewer said. “Rowing stuck!”

The feeling of camaraderie and physical aptitude that is built when rowing is second to none.

“Before and throughout a race, there is an indescribable amount of togetherness and adrenaline a rower feels,” Brewer said. “Every stroke of movement is felt in that boat and when your boat is in sync, reaching your max pressure, there’s no rush like it.”

Belvin spoke to that same appeal.

“It’s very much a team sport,” Belvin said. “It revolves around rowing for the men or women in front of you. You’re either in a two-person, four-person or eight-person boat. In that aspect of rowing, it’s very important to be in time; it’s a very rhythmic sport. A lot of people in the sport call it the king of team sports.”

It’s not easy to be king of anything. However, besides having a royal bloodline, rowing might be one of the easiest ways to earn that title — albeit self-proclaimed. Regardless, it is a sport that works every major muscle group in the body and is a great way to stay in shape.

“One of the unique things about rowing is that anyone can do it,” Belvin said. “You don’t need experience. We don’t have tryouts; we don’t cut anyone. If you’re looking to be athletic or find a sport to get you out and exercising every day, this is a good sport to try out.”