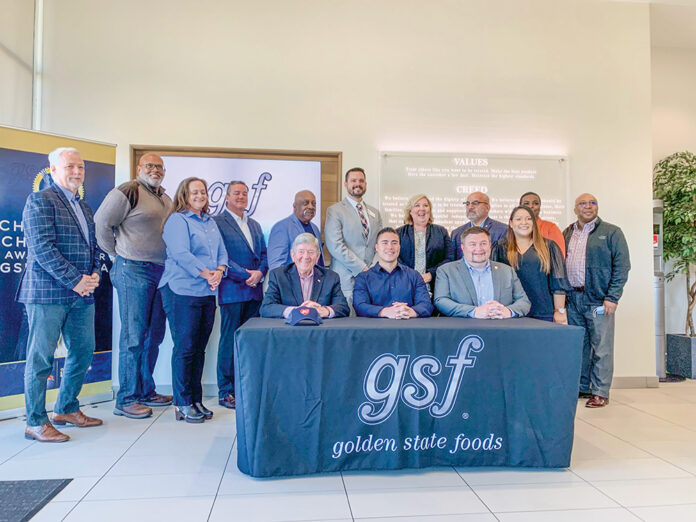 By Harrison Tarr
For the Observer

In a time in which aiding veterans in their transition from military service to civilian life is of utmost importance, the city of Opelika and Golden state foods shared the privilege of welcoming the community’s first Career Skills Pathway (CSP) intern — Andrew Vacarro — on Friday morning.

Although already a service-wide program within the U.S. military, Opelika’s connection to the Fort Benning CSP symbolizes a new chapter in veteran employment within the community in which active duty service members are placed in six-month internships — two months in the classroom and four on-site — with local businesses in efforts to have full-time employment following the conclusion of service.

“I’m actually in the process of separating out of the military,” Vacarro said. “This is a program through Fort Benning and the city of Opelika to help me bridge that gap. It’s essentially an internship while I’m on active duty that allows me the potential for a job in this area and to translate my arms skills into civilian skills.”

For 25-year-old Vacarro, the CSP brought him to the logistics department of Golden State foods as the inaugural member of the Fort Benning to Opelika connection.

“I feel like a lot of things happened behind the scenes and I got extremely lucky,” Vacarro said. “I remember I was on post, I was looking for an internship and nothing was very attractive to me. It was all a couple weeks geared toward the technician side of stuff.”

For the active duty member of the U.S. Military, entering the field of logistics was an enticing and a welcomed change of pace in regards to his previous job search.

“I really wanted to get into field logistics because that’s where I found my passion on the armor side at Fort Benning,” Vacarro said. “I walked into the office after calling them a few times and they said there’s a new program through the city of Opelika where you can do whatever you want in whatever field. Call this number.”

The number given to Vacarro? That of Opelika’s economic development project manager Jon Sweatman.

“I talked to John Sweatman, he really hooked me up,” Vacarro said. “He did a lot of the work reaching out to businesses for me. Once I told him I wanted to do logistics, he sent my resume out.”

With the aid of Sweatman, Vacarro’s preliminary work to find an internship left him with a decision to make in regards to where to take his skillset. He landed on Golden State Foods.

“They’re a proven industry leader in a field that, it’s a little different than I’m used to,” Vacarro said. “People ask ‘is it hard to transition?’ Not really. It’s run like a military operation. I was very impressed by the culture of how the systems and processing worked. It’s a very smooth process. The whole process is very logistics heavy.”

While Vacarro is the first member of the CSP to land an internship in Opelika, the path between Fort Benning and the community seems to have a clear future in aiding those on active duty in their transition back to civilian life.