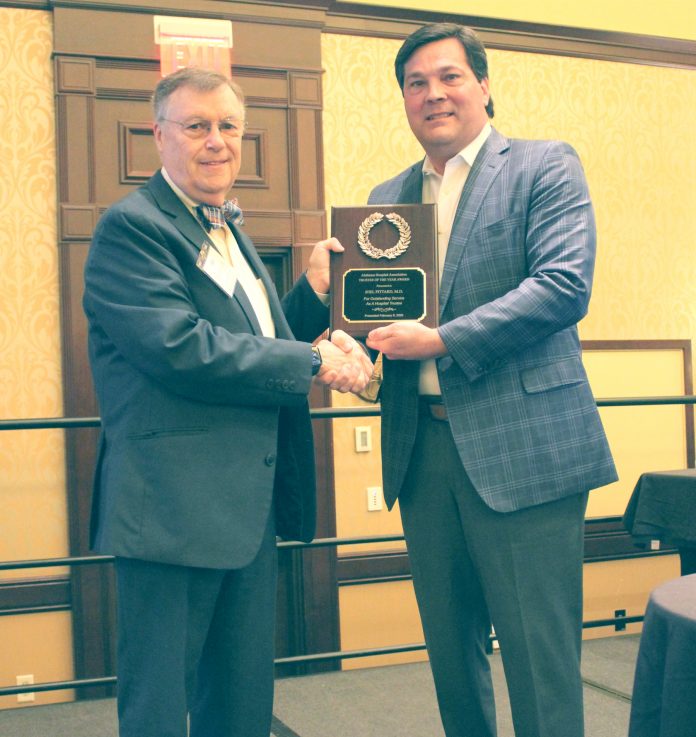 Joel Pittard, M.D., a hospital trustee and board chairman of East Alabama Medical Center (EAMC) in Opelika, was recently honored by the Alabama Hospital Association (AlaHA) as its 2020 Trustee of the Year, an award that recognizes exemplary service to hospitals, their patients and their communities.
According to Donald Williamson, M.D., president of the Alabama Hospital Association, good trustees are critical to the success of a hospital.
“Joel Pittard is the kind of leader that changes and shapes communities,” Williamson said. “Not only has Dr. Pittard served as a physician for more than 35 years, but he’s provided leadership to numerous statewide and national boards and organizations. He’s served EAMC in a number of areas, and we couldn’t be more grateful for his lifelong dedication to quality health care in Alabama.”
“We are extremely proud of Dr. Pittard for being selected for this high honor from AlaHA,” added Laura Grill, president of East Alabama Medical Center. “He is a wonderful board chair and has been a great leader in our organization for years. His commitment to the care of our patients and our community is stellar.”
Pittard served in the U.S. Navy Medical Corps before starting his career at EAMC. Since arriving at EAMC in 1980, he has served the hospital in many capacities including as chief of staff and a member of the medical executive committee. He has been an active member of the EAMC Board of Directors for 25 years and is currently the board’s chairman. Pittard has received many prestigious awards and was inducted into EAMC’s Leaders of Distinction in 2016. He is currently a member of the American College of Obstetricians and Gynecologists and the American Medical Association. He has served as the president of the Medical Association of the State of Alabama and the Lee County Medical Society and as a member of the Alabama Board of Medical Examiners, the Southern Medical Association and the American Society of Reproductive Medicine. He has also been a member of the Advisory Board Executive Committee for Auburn University Women’s Health and the Advisory Board in the College of Sciences at Georgia Tech. He is active in the Lee County United Way and the board of the Auburn United Methodist Church.
The Alabama Hospital Association, based in Montgomery, is a statewide trade organization that represents more than 100 hospitals and numerous other health care providers by offering membership services designed to enhance the provision of health care in Alabama.