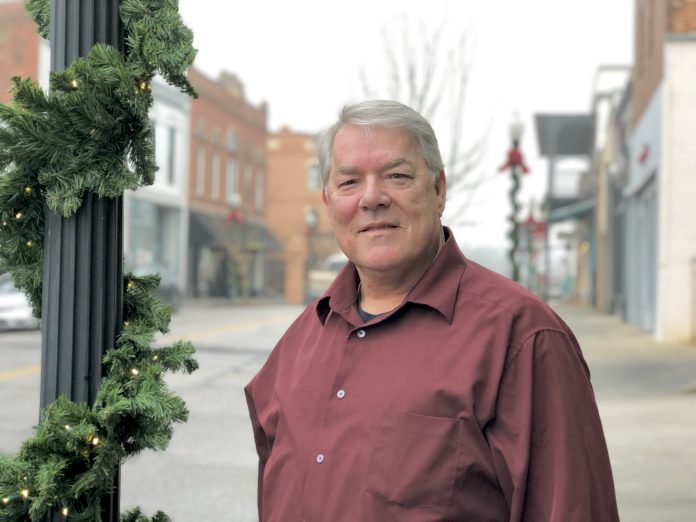 At the conclusion of his shift on Dec. 4, Opelika native Gene Manning remembers the walk to his truck being longer than normal, with the gravity of that moment weighing heavily on his mind.
“It was an emotional moment. I knew that that was the last time I was leaving to go home after a shift … my career is over,” Gene said.
Gene, who has worked the last 16 years as the lead paramedic for East Alabama Medical Center’s Emergency Medical Services and most recently as the lead paramedic at Station 1 located behind the hospital, will officially retire on Jan. 1. This marks the end of a more than 40-year career as a first responder.
Gene grew up in the Opelika City School system, eventually making a name for himself on the gridiron even though he was constantly under the shadow of his older brother Tim, who was once a star running back for the Bulldogs.
After high school, Gene began working at Leshner Mills and got married to his wife of 44 years, Sandra. During his tenure at the mill, he starred as an extra during the filming of Norma Rae, even appearing by himself in a scene with the film’s protagonist, portrayed by Sally Field.
One day, Sandra called Gene during a lunch break from her job at Opelika City Hall to inform him of multiple job openings within the city’s fire department. With no prior interest or first-responder experience, he said he decided to take a chance and apply.
Gene was officially hired by OFD on June 26, 1978. Days later, he reported for fire-training school, the beginning of a nearly four-month-long process.
Assigned to what was then-Station 3 on 8th Avenue, Gene said that the station was manned by himself, apparatus operator and a newly commissioned lieutenant that was out to make a name for himself. He recalled that “days were normally pretty slow then” and that they worked on perfecting the lawn surrounding the station.
Hearing of openings for EMT training school, Gene “jumped at the chance” and enrolled. Less than a year later, in 1980, he had successfully completed two paramedic courses, completed his paramedic certification and was assigned to the previous Station 1 on Avenue B.
Assigned to the Rescue 1 vehicle, Gene and his fellow firefighters and paramedics would respond to calls across Lee County except for Auburn, which operated autonomously.
Later that year, he took on a part-time job with AAA Ambulance Services, which was owned and operated by Elbert Baker. That business was eventually absorbed by the East Alabama Medical Center in the mid-1980s and hired Gene and fellow Opelika and Auburn first responders to help operate the service.
Gene made ripples in the first responder community, being recognized as the “Paramedic of the Year” for the Southeast region of Alabama in 1984, and received letters of praise and admiration for his efforts. The following year, he made local and national headlines when he saved a young Opelika girl named Lindi Yates from drowning at Bama Park on Lake Martin.
Eighteen years later, Gene retired from the OFD with the rank of captain.
Following a brief departure from the ambulance service, Gene taught courses at Opelika’s Southern Union State Community College campus. He returned in 2003.
Because of his age and eligibility for retirement, Gene said “now seemed like the right time to make that move.”
Lee County Probate Judge Bill English, Opelika Fire Department’s current Fire Chief Byron Prather and many other prominent individuals were among the many that Gene taught and impacted during his career.
“Capt. Gene Manning served the citizens of Opelika as an Opelika firefighter. During his time at the Opelika Fire Department, Gene became a paramedic during the early years when E.M.S. was being introduced into the fire serve. Gene was considered one of the best paramedics in the Opelika Fire Department. He also began teaching E.M.T.’s at Southern Union Community College and has instructed hundreds of students and started their careers in EMS. Gene Manning rose to the rank of captain which he would eventually retire at. He has worked at the hospital for E.T.S. starting in the 1980s and now is retiring from there. We at the Opelika Fire Department wish him well and good health in his retirement,” Prather said in a statement.
Gene will continue working post-retirement as the chief deputy coroner under Lee County Coroner Bill Harris, longtime colleague and personal friend.
Much of Gene’s time in retirement will be spent with his wife and family, which includes his two adult daughters Amie and Christal and their five combined children, all boys. He and Sandra are active members of Auburn’s Restoration Church.
Looking back over the highs and lows of his career, Gene said he is able to come up with one main takeaway from the experience.
“On the days that everything went right, I knew that that night’s sleep was going to be great. It never felt better,” Gene said. “This was an incredibly rewarding career … and I’m glad I had the opportunity to help make a difference.”