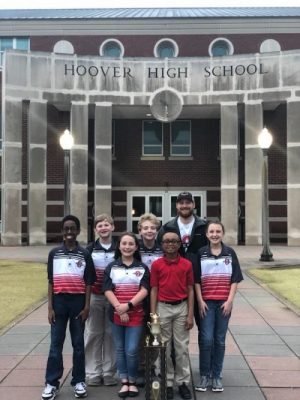 “They definitely superseded my expectations,” Harris said. “This is my second time to start up a program [at Smiths Station Junior High School] and you always have some growing pains, because there’s so much knowledge required and it’s so different from what most students learn.”

“Without a doubt, this is the most talented team I’ve ever coached. Teams like this do not come around very often.”
Because of its victory Saturday, the team will move on to Orlando in mid-June for the quiz bowl national championships, organized by National Academic Quiz Tournaments.
Similar in format to longtime CBS game show “Jeopardy!,” contestants in teams of four must attempt to answer questions first and correctly before their opponent. Topics covered include current events, geography, history, fine arts, literature and science, among others.
Harris conducts two practices per week for OMS’s elementary and seventh and eighth-grade teams, which are open for non-participating students to attend.
“I truly have a place in my heart for quiz bowl,” Harris said.” I think it’s a great avenue for kids to represent themselves and great avenue for the community. For people moving into this area, they hopefully will know that their kids can win championships academically and help them push to become better people and students overall.”
In addition to becoming more well-rounded academically, Harris said quiz bowl players tend to have better ACT scores and enhanced scholarship opportunities.
“If you’re a pretty successful or even an average player in high school, I can almost guarantee you that they will receive a scholarship at least at the community college level. And those who are really successful can go on to schools like Auburn, Vanderbilt or Harvard,” Harris said.
OMS’s seventh and eighth-grade team also turned in a strong showing last Saturday, finishing 2-3 in its first state appearance.
Future plans Harris has for the program include the creation of teams at other schools within the Opelika City Schools system, including Opelika High School.
For more information about the program, contact Harris by email at corey.harris@opelikaschools.org.