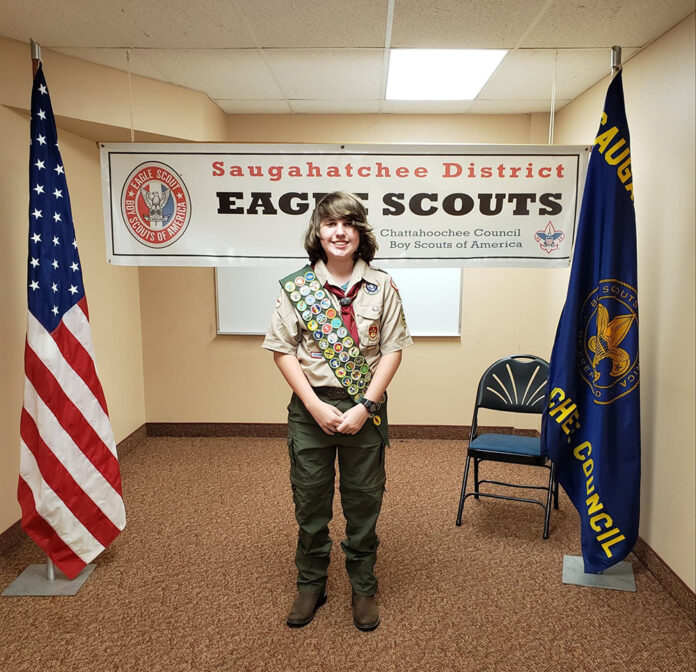 The Eagle Scout final project is one that the scout plans for and carries out on his/her own. Stadler chose to build something that would benefit the community.

“My project was to build a gaga ball  arena,” Stadler said. “Gaga ball is Israeli dodgeball. Players hit the ball at each other with their hands and are eliminated if the ball strikes them on or below the knee.”

Gaga ball arenas, or “pits,” are usually hexagonal or octagonal and range in diameter from 14 to 25 feet. Stadler built a wooden, octagonal arena with a diameter on the higher side of that range, and each wall stands about three feet tall.

Stadler said that gaga ball is a staple activity at Boy Scout summer camps. For those few who don’t know how to play the game, he made accommodations.

“There is a rules sign posted to the arena that includes a QR code that is attached to a video of [my fellow scouts] playing the game with my voice-over of the basic rules,” he said.

The Gaga Ball arena was the final step in earning him Eagle Scout rank, the highest in the Boy Scouts of America program. Stadler said that Boy Scouts has changed his life for the better and that this last achievement is the culmination of many years of work:

“It has taught me valuable skills and has given me a better sense as to how to take care of myself and others. To me, reaching Eagle Scout means that I have accomplished my goal that I set for myself back in third grade, and it makes me feel proud of myself.”