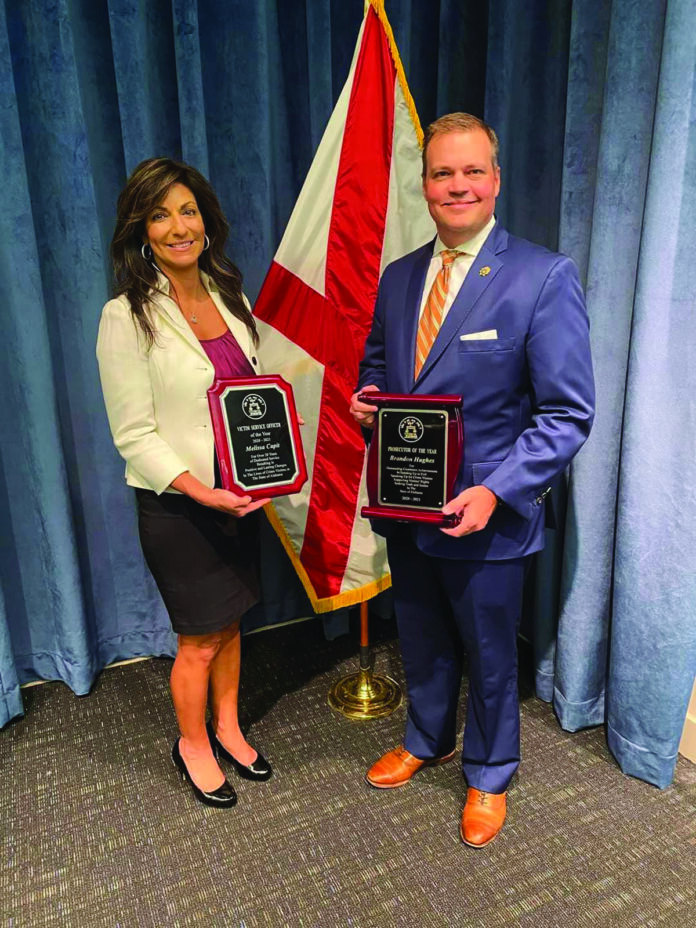 Photo courtesy of the Office
of the District Attorney

Lee County District Attorney Brandon Hughes was named Alabama Prosecutor of the year and Melissa Cupit was named Alabama Victim Service Officer of the year by VOCAL (Victims of Crime and Leniency). Established on 1982, VOCAL is Alabama’s most recognized crime victim advocacy organization. VOCAL was organized to create a more balanced system. From VOCAL’s website: “Somewhere along the way, victim’s rights across the nation, for all practical purposes were non-existent. The same system that victims expected to protect them was hampered due to the aggressive efforts to ensure the rights of the offenders were protected. VOCAL’s goal has been to balance the scales of justice by giving crime victims those same rights rather than eroding the rights of the offender.”

“Being named the VOCAL Prosecutor of the Year for the state of Alabama is unquestionably the highest honor of my eighteen years as a prosecutor,” Hughes said in a press release. “There is no higher calling, no greater responsibility for a prosecutor than that of victim advocate. On my first day as Lee County’s District Attorney I told the office that we were going to be a victim centered DA’s office. I wanted them to understand that the cases we prosecuted belong to the crime victims and their families and we were merely to be good stewards of those cases. No one is more effected by crime than the victim and their loved ones and it’s so important that we as prosecutors always remember that. The greatest validation a prosecutor can receive is when a crime victim or their family says, ‘Thank you.’ As I accept this award on their behalf, I take this opportunity to tell them ‘Thank you’ for the impact each of them has had on me.”

Cupit offered the following statement: “Being able to serve victims and their families during the most difficult time in their life has been such an honor and a privilege. Their worries and their concerns become my worries and my concerns. To be able, however small, to help ease their pain is my life’s passion. I have made some lifelong friendships with these families, and that is my true accolade. I am honored to receive this award not on behalf of myself, but on behalf of every crime victim and their families.”