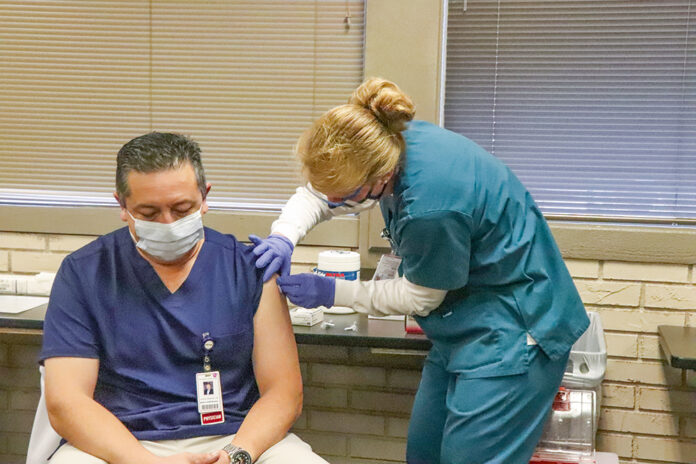 Lee County might finally see the light at the end of the tunnel. At least, that’s what Dr. Ricardo Maldonado and Dr. Michael Roberts said Wednesday after receiving the COVID-19 vaccine.

The two were among the first East Alabama Medical Center employees to receive the vaccine.

“[I’m] very excited,” Maldonado, who is EAMC’s infectious disease expert, said. “I think the whole country is tired of the pandemic, and that includes every single one of us on the front line. We have seen so much pain and death in the last nine months and today I see, for me, that I can see a light at the end of the tunnel.”

EAMC is one of 15 hospitals that received the vaccine in Alabama, and it began distribution Wednesday.

“The vaccines arrived around 7 a.m. today,” said John Atkinson, EAMC spokesman, Tuesday. “After opening the container, the vaccines were placed in a sub-zero freezer at negative 80 degrees Celsius within three minutes as required.”

To receive the vaccine, employees must be with patients 25% of their time at the hospital. The vaccines are also first come, first served. Hospital employees call a number and join a queue.

“There’s a lot of excitement over the vaccine distribution beginning in the United States, but we all have to remember that large-scale distribution is still a few months away,” Atkinson said. “I say that because the vaccines do not address the current situation that hospitals find themselves in. Many are low on beds and more still are short of ICU beds.”

“Now what we do with the vaccine is really up to us now,” Maldonado said. “Our job is to educate our people so we can build vaccine confidence, so we can seize this moment.”

Both doctors said they hoped that by receiving the vaccines themselves, public awareness could be raised.

“If I’m telling you that I want you to get a vaccine and I’m not willing to get it done myself, well that doesn’t say very much for my credibility, does it,” Roberts said.

Maldonado said that over the next 48 hours after receiving the vaccine, he could experience a bit of soreness in his arm, or low-grade symptoms like fever or body aches, which can be alleviated with over-the-counter pain medication.

Both Maldonado and Roberts will receive a second injection in about two weeks, which is part of the Pfizer vaccine process.

“This vaccine, this new, this first vaccine from COVID-19 presents the opportunity to change the trajectory of the pandemic,” Maldonado said.

Both Maldonado and Roberts said they understand why people are hesitant to take the vaccine.

“There’s obviously some degree of fear, concern, that maybe there’s something out there that we didn’t pick up in the trials,” Roberts said. “This vaccine appears to be very safe and very effective based on the science and based on the trials done by Pfizer.”

Maldonado compared the Pfizer vaccine to other vaccines that have been proven effective, the polio vaccine, for instance.

Roberts said that he knows what COVID-19 can do in a patient and the deaths it has caused.

“If you want something to get concerned about and to be upset over, be upset about the death that we’ve seen, be upset about what Ricardo and I have seen and our whole staff at EAMC,” Roberts said.

There are those who say they might not get the vaccine because they are low risk, but Roberts said that anyone still has the potential to spread the disease. So getting vaccinated is still important.

The vaccine could be the beginning of the end to the pandemic, Maldonado said.

“It feels like maybe there’s hope, maybe we can stop doing all this, going to room after room, seeing people struggling to breath, watching people take their last breath, sometimes not with any family around because their family is sick,” Roberts said.

Maldonado said there will need to be 50% of the population that is vaccinated before herd immunity comes into play.

“It’s not time to stop the things that we know and that we’ve already put into place to help limit the spread of COVID-19,” Roberts said.

“What we shouldn’t do is politicize the vaccine,” Maldonado said. “We have politicized enough of this problem and that hasn’t helped us at all. It’s time to believe our scientists. We have some of the best in the world.”