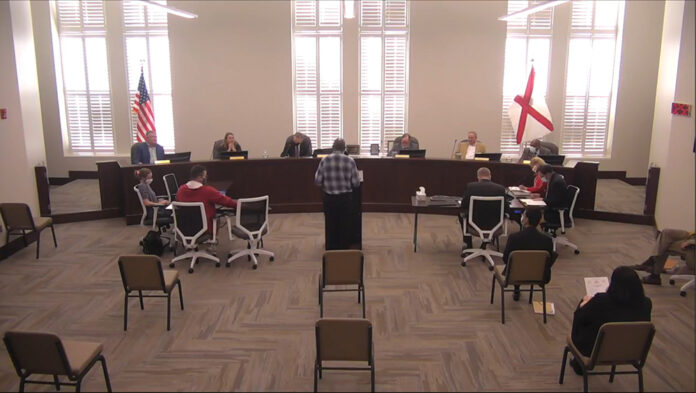 The Lee County Commission approved two items related to the potential quarry by CreekWood Resources, LLC, in Beulah that a group of citizens is protesting against.

Citizens will have the opportunity to participate in a special-called election on May 18 which could result in zoning for Beat 13.

This election will have one item on the ballot — do residents want the newly-formed planning commission to have the authority to establish zoning regulations in Beat 13 or not.

The planning commission, and election, are the result of the fight against a potential quarry in Beulah.

The quarry would be located on West Point Parkway (US Hwy 29) approximately 0.6 miles east of Lee County Road 177, according to the Alabama Department of Environmental Management Agency website.

Creekwood also tried to install a quarry in Opelika but due to a large amount of backlash, the company withdrew its permit in February 2020.

The planning commission met for the first time on April 7 and is headed by Kevin Flannagan, chair; Tom Kelly, vice chair and Danielle Ritch, secretary.

The county commission received recommendation that the planning commission should find a consultant to help them with their goal — establishing zoning regulations for Beat 13.

Although the election will be held on May 7, the planning commission is not under obligation to draft regulations before that time, English said.

“It will not be effected until it is adopted and until after the election authorizes it,” he said.

Once the planning commission create regulations, they will come before the Lee County Commission to be adopted as an official ordinance, English said.

District 2 Commissioner Sarah Brown said that she expects there will be some people who assume that just because they vote for the planing commission to authorize regulations, the quarry will not happen.

“They are voting on whether or not they want the authority of the planning commission and the county commission to apply to their beat,” English said. “Whatever is adopted. Whether it’s adopted before or after, that’s not the subject of the vote.

The commission voted Monday night to also approve funding for a consultant for the Planning Commission to provide temporary services as the commission works to draft its regulations.

Secondly, the commission voted to allow a broadcast of the upcoming Alabama Department of Environmental Management Agency public hearing. The broadcast will be shown in the Lee County Meeting Center, which will allow 100 citizens to watch.

The public hearing will be held at the Opelika Municipal Court (300 Martin Luther King Blvd.) at 6 p.m. on May 20 and will allow one speaker in the room at a time.

“I think they’ve been doing this as a practice during coronavirus and so they’re continuing it but it doesn’t make it very much of a public hearing,” said Probate Judge Bill English.

English said that anyone who plans to register to speak or submit a statement should focus on water and air quality with the quarry, because that is all ADEM is concerned with.

“Especially the people speaking, that time in that room is going to be rather precious, it needs to address water issues and air issues and not all the other issues that are very serious, like noise and traffic and … on and on and on,” English said. “That’s not their purview. And they’re not going to listen to that much.”

For more information on the public hearing, view our story here: https://opelikaobserver.com/public-hearing-set-for-beulah-quarry/.

– The Commission heard an update on the Lee County Litter Campaign.

– The Commission voted to provide an office space for the county attorney.

– The Commission voted to approve a retail beer and retail table wine application for Backwaters Marina.

– The Commission approved County Administrator Roger Rendleman to begin a search for the next county administrator following Rendleman’s retirement. He will use a search firm for the process.