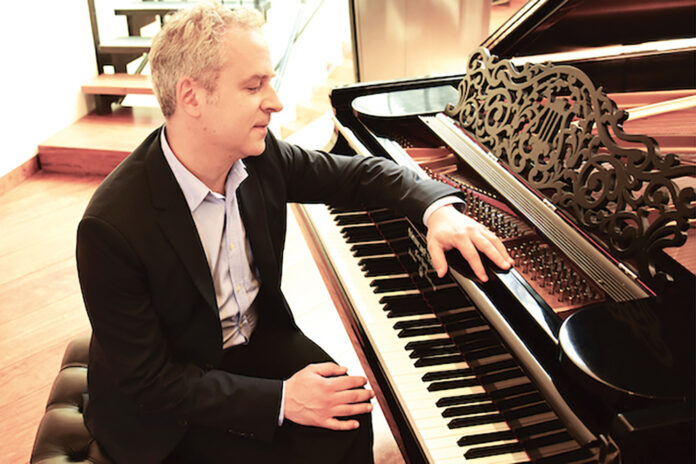 CONTRIBUTED BY THE JAY AND SUSIE GOGUE PERFORMING ARTS CENTER

Denk, who is currently touring throughout the United States and Canada, was originally scheduled to perform in Auburn with Quebec-based orchestra Les Violons du Roy. Due to COVID-19-related touring conflicts, however, Denk will now perform solo. The matinee program will feature Johann Sebastian Bach’s “Well-Tempered Clavier” (Book 1) in its entirety.

Considered one of America’s foremost pianists, Denk is the winner of a MacArthur “Genius” Fellowship and the Avery Fisher Prize. In 2016, he was elected to the American Academy of Arts and Sciences. He has performed numerous times at Carnegie Hall and in recent years has collaborated with the Chicago Symphony, Philadelphia Orchestra, New York Philharmonic, Los Angeles Philharmonic, San Francisco Symphony and Cleveland Orchestra.

Denk’s recording of the “Goldberg Variations” for Nonesuch Records reached No. 1 on the Billboard Classical Charts. His rendition of Beethoven’s Piano Sonata No. 32 in C minor, Op. 111, paired with György Ligeti’s Études, was named one of the best discs of the year by The New Yorker, NPR and The Washington Post.

Denk has a long-standing attachment to the music of American modernist composer Charles Ives, and his recording of Ives’s two piano sonatas was featured on many “best of” lists. His latest album, a compilation of Mozart piano concertos performed with the Saint Paul Chamber Orchestra, was released by Nonesuch Records in September 2021.

Denk also is known for his original and insightful writing on music. His work has appeared in The New Yorker, The Guardian and on the front page of The New York Times Book Review. His upcoming book, “Every Good Boy Does Fine,” will be released by Penguin Random House later this month.

Tickets for Denk’s March 13 solo concert can be purchased online at goguecentertickets.auburn.edu, by telephone at 334.844.TIXS (8497), or in person Tuesday through Friday from 1-4 p.m. at the Gogue Center box office, located at 910 S. College St. in Auburn.

Auburn University is a nationally ranked land grant institution recognized for its commitment to world-class scholarship, interdisciplinary research with an elite, top-tier Carnegie R1 classification, life-changing outreach with Carnegie’s Community Engagement designation and an undergraduate education experience second to none. Auburn is home to more than 30,000 students, and its faculty and research partners collaborate to develop and deliver meaningful scholarship, science and technology-based advancements that meet pressing regional, national, and global needs. Auburn’s commitment to active student engagement, professional success and public/private partnership drives a growing reputation for outreach and extension that delivers broad economic, health and societal impact.