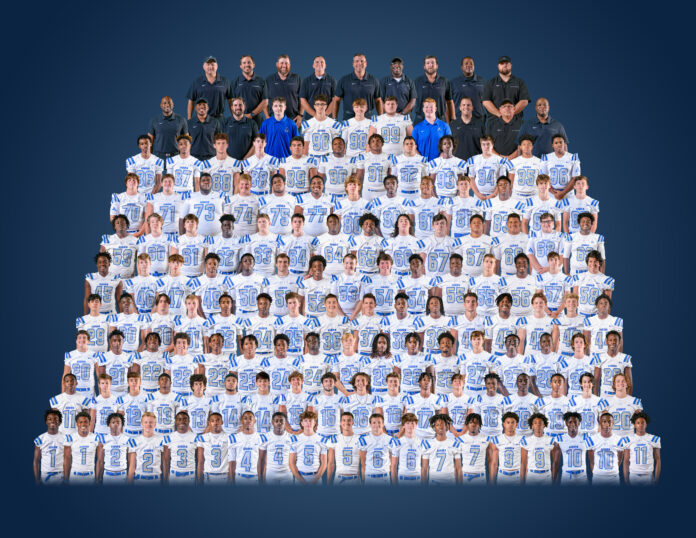 It’s been a rough week for Auburn teams who traveled to Bryant-Denny Stadium in Tuscaloosa. The Auburn University Tigers lost the 86th edition of the Iron Bowl, 42-13, on Saturday. And on Wednesday night, their younger counterparts, the Auburn High Tigers (11-2), lost a 30-29 heartbreaker to the Thompson Warriors (14-0) in the AHSAA Class 7A State Championship.

“This game hurts,” Auburn Head Coach Adam Winegarden said in his post-game press conference. “I’ve never experienced anything like this; I know our kids haven’t.”

With about 25 seconds left on the clock, Auburn High led 28-19 and looked destined to capture the first state championship in program history. The Tigers knelt the ball three times, running the clock before facing a fourth down. Unable to completely run out the clock, the Tigers lined up to punt the ball back to the Warriors from their own 38-yard line. Next, an unthinkable series of plays would go Thompson’s way, and one of the wildest endings to a high school football game that anyone has ever seen would follow.

Auburn snapped the ball. Thompson busted through and blocked the punt. The Warriors’ special teams then picked up the bouncing ball behind the line of scrimmage and ran it in for a touchdown. That was the beginning of a downward spiral, and suddenly Auburn’s lead felt fragile. Down 29-27, the Warriors then lined up for an onside kick with 18 seconds remaining.

Auburn needed only to recover the onside kick to win. But the announcers noticed it first. The Tigers were greatly outnumbered at the top of the field. Well, that’s where Thompson kicked an end-over-end rolling ball and won the numbers game – recovering the onside kick. The drooping, disappointed heads on Thompson’s sidelines were now wide-eyed and full of hope; the Warriors needed just about 30 yards to reach field goal territory and have a chance to win the game.

Winegarden said “right now we’re kind of shocked,” after witnessing what would transpire next.

There was 0:16 on the game clock, and Thompson ran three plays. Auburn was called for two gut-wrenching pass interference penalties, and Thompson got the ball to the Auburn 18-yard line. That’s when Thompson kicker Trevor Hardy lined up and calmly drilled the 35-yard field goal with no time remaining to stun the Tigers and secure back-to-back Class 7A championships for the Warriors.

“Right now it’s unbelievable,” Thompson Head Coach Mark Freeman said in his post-game press conference. “I want to thank the good lord Jesus Christ for the whole season for everybody that played football this year. Right now I’m basically speechless. The way that things turned in the end and the way it happened, it’s unbelievable.”

Thompson’s players, coaches and faithful fans erupted into a celebratory frenzy as Auburn was left in disbelief. It was a shocking end to what had been a masterful performance by the Tigers until it all fell apart in the final 30 seconds.

To that point, the Auburn defense had mostly nullified the nationally ranked Warriors, holding them to just 19 points.

To be fair, Thompson was weakened when quarterback Conner Harrell – a highly rated 2022 prospect with offers from Tennessee and UAB – exited the game in the first half due to injury. But that shouldn’t take away from the ferocious defensive effort put forth by the Auburn High defense.

To begin the game, Thompson jumped out to an early lead. But Auburn battled back to take a one-point, 14-13 lead into halftime.

On the Tigers’ first drive of the second half, they faced a fourth-and-one from just across the 50. Caldwell faked a handoff to his fullback and broke left outside the tackles. The Thompson safeties called off their chase at about the 10-yard line as Caldwell reached for the heavens as he scampered into the end zone untouched.

Thompson struggled in the second half without Harrell, and backup quarterback Tre Roberson looked shaky as his replacement. Roberson was sacked twice on Thompson’s opening drive of the second half, and Auburn pinned the Warriors to a fourth-and-32 from their own 1-yard line. Thompson shanked the punt; the Auburn offense took over inside the red zone. Five plays later, running back JT Rogers scored a 3-yard touchdown run to give the Tigers a 28-13 lead with 5:47 left in the third quarter.

That should have been enough. The Auburn defense continued to get after the quarterback, giving Auburn good field position. Thompson was able to capitalize only on a 6-yard touchdown run after an Auburn fumble set them up deep in the Tigers’ territory. Down 28-19, with 8:47 left in the game, Thompson elected to attempt the 2-point conversion. The Auburn High defense forced an incompletion and kept the nine-point lead intact.

After an Auburn punt, Thompson looked to drive the length of the field to make it a one-score game. The Tigers looked to have locked up the game when defensive back Quay Nelms intercepted Roberson’s pass and returned it to near midfield with four minutes remaining.

Thompson then forced another punt to get the ball back but quickly turned the ball back over on downs. Auburn then went into victory formation to knee the ball; that’s when the now-fabled ending ensued.

In the end, Winegarden and his players were humble in defeat. Instead of justifiably complaining about some questionable calls or sulking in silence, they were thankful for the journey.

“We take a lot of things for granted in life,” Winegarden said. “At the start of the year we didn’t know if we would play one game. We really took the approach, that ‘Hey, make every practice like a game and make every game like your last.’ Having the opportunity to continue to play. . . all that’s been a special thing. I just love our team.”

Joey McGinty led a valiant defensive effort for Auburn with 6.5 tackles, 3 tackles for loss and 1 forced fumble. Caldwell led the way on offense, finishing 9-of-17 passing for 88 yards, 1 touchdown and 1 interception. He also rushed for 85 yards and 1 touchdown on 11 carries.

“Matthew has had a great year for us, and he’s been a tremendous leader for our football team,” Winegarden said. “I thought he played great tonight. Joey did a tremendous job on defense, brought a lot of pressure. He’s a great ball player and really led our defense tonight.”

Caldwell looked understandably dejected at the post-game press conference but gave an admirable and humble recap of the season to sum things up.

“You couldn’t ask for more this season, other than to win this game,” Caldwell said. “That’s just how it goes sometimes. I wouldn’t trade any other season for this one. Any other guys in my locker room, I wouldn’t trade them for anything.”