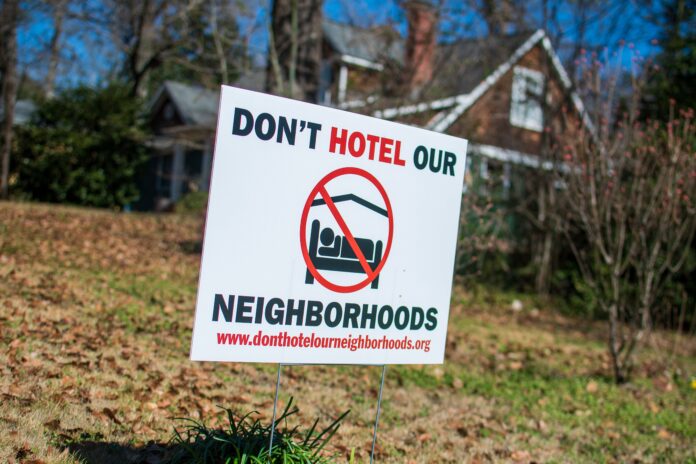 The Auburn City Council debated and discussed proposed short-term rental regulations, but it did not pass an ordinance Tuesday night.

The regulations as they were presented by the planning commission were amended by a council member instead and will be re-evaluated on March 16.

The original recommendations can be found here: https://www.auburnalabama.org/short-term-rentals/Proposed%20Short-Term%20Rental%20Zoning%20Regulations.pdf.

The support for short-term rentals:

There were many residents who currently own property in Auburn and rent their homes out on weekends for extra income.

One resident, William Lowry, said that when he purchased his property and renovated it, he did so under the assumption that he would  rent it out.

“We have never had a problem, we have enjoyed the hospitality aspect of doing it for others,” he said. “Graduations are especially rewarding because we often provide families somewhere comfortable to hang out, eat and be together, unlike a hotel.”

Lowry spoke to a point that many of the renters made, Air BnBs are not a hotel, he said.

There are signs dotting Auburn with messages like, ‘Don’t Hotel Our Neighborhoods’.

“This isn’t hoteling your neighborhood,” said another resident, Joshua Poole. “This is someone’s home; they’re just simply sharing because they have extra space and the ability to share.”

Lowry also asked that the council consider ‘grandfathering in’ renters who are already using their homes as Air BnBs.

“The short-term rental just works perfectly and I know I’m not alone in this in that there are a lot of professors that commute and there are times that they need to stay a couple nights, or three nights, a week,” she said.

The opposition to short-term rentals:

Many of those opposed to short-term rentals have had problems with their neighbors renting to people who do not respect the neighborhood.

“There’s music going on in the backyards, there’s big-screen televisions that you can watch the game from two yards over, people with fireworks, we’ve got dogs that go berserk and are frightened with fireworks,” said Lan Lipscomb. “Then there’s trash and there’s drunk and boorish behavior and we’ve got a teenage girl that’s been exposed to it.”

“They’ve been a little bit like goldilocks and the three bears,” Caskey said. “The porridge was too hot, or too cold and finally just right. They developed an ordinance that was too restrictive, then they did one that was too permissive and now hopefully they’ve gotten one that’s just right and it’s a good compromise.”

One resident, Martha Thomas, said she is for the proposed regulations and that she believes those who are currently using their properties as short-term rentals in the neighborhood conservation district (NC zone) should not have done so in the first place, given that under current zoning ordinances, they are not allowed.

“So these people that are doing this, are doing it illegally,” she said.

After the conclusion of the public hearing, Beth Witten, Ward 3, proposed an amendment to the planning commission’s regulations.

This caused some controversy between council members specifically over the amended portion that would allow short-term rentals in the neighborhood conservation district (NC zone).

Additionally, Parsons received a petition with over 350 signatures from residents in the neighborhood conservation district against short-term rentals, along with roughly 150 comments from citizens, he said.

“I don’t even know where to start with the questions,” Parsons said. “For example, I can see Beth Witten smiling gloriously here, from where do you get the basis to supply us with this? I would like to know that.”

Witten said it is her right as a council member to make amendments and she based the amendments off of feedback from her constituents.

She also said that her amendments are more restrictive on short-term rentals.

“The one piece that I recommended, which would make homesteads city-wide does not negate the short-term non-primary piece which would prohibit investment rentals in the NC neighborhood,” she said.

Parsons reminded Witten that former Planning Director Forrest Cotton had cautioned a slow approach to short-term rentals and he offered an amendment to Wittens amendment which would not allow homestays in the NC zone. After a vote, however, Parsons’ amendment failed by a vote of five to three.

Witten’s amended ordinance passed by a vote of 6 to 2. Because of the significant changes, the new regulations will be advertised to the public and a new public hearing will be held on March 16, when the council will once again discuss the ordinance.