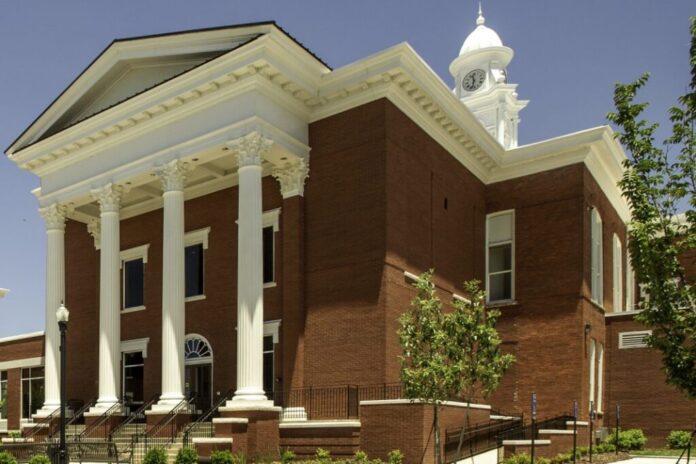 The commission has now officially created a working budget for some of the county’s American Rescue Plan Act funding.

The county has close to $32 million total to spend. $10 million of that has been designated as ‘revenue replacement’. The remaining $21.9 million plus is to be spent on COVID-19-related uses.

The Investing in Alabama Counties program is part of the Association of County Commissions of Alabama, which the county voted to be a part of. So, 4.64% of that $21 million funding will be used for the IAC fee, according to the working budget.

Other uses include $1.3 million for ventilation in the Justice Center.

While specific amounts were not designated to things like water projects, broadband, EMA Communications Equipment, etc., County Administrator Holly Leverette came up with percentages based on the priorities from the commission members during their work session.

The working budget she presented designates 63% of that funding to water projects, 15% to broadband, 5.92% to ventilation in the Highway Department Complex, 1% to ventilation in the Deed Room of the County Courthouse, 2.9% to EMA communications equipment/response and 1% for metal detectors with temperature readings.

District 3 Commissioner Gary Long expressed concern with this because the broadband project costs are unknown right now, and that information will not be released until later.

“I just have an issue raising broadband and we don’t have a clue what the costs will be,” he said.

He expressed concern that the costs wouldn’t be as high as anticipated and the county will be left with leftover money that they then can’t go back and designate to water, of which the costs will be high, he said.

Cannon buckled down and said he believes this is why Lee County needs to designate more toward broadband because companies will not be going to more rural areas where people are in need of that service.

“What has been recommended to us is to set money aside, determine how much we want to set aside and then let the IAC put together kind of a map of Lee County as to areas that the states’ money and those companies are going to fill those gaps, and then we can come back in with the money we’ve set aside and then look at where it seems economically feasible for us to go in,” Leverette said.

Long also said that Lee County doesn’t know what water projects will be approved either. Cannon expressed that he would like to see the water projects encompass expansion to residents who don’t have it.

Leverette suggested designating 58% to water and the remaining 6% into the broadband category.

Long and Cannon both agreed.

Now, this has not been officially allocated, therefore the commission did not vote on the working budget.

The $10 million revenue replacement funding was voted on Tuesday night, however. The county voted to designate $7 million of this, or 70%, toward construction planning for the new Highway Department Complex.

Another $500,000, or 5%, has been designated to the Environmental Services Fund 140 for the volume of call increase.

Finally, 7% was allocated for an access road for the Beauregard Parks.

The remaining 18% was left undesignated for now, though a discussion ensued on possibly using this for broadband if necessary. There was also the possibility of using it for parking lot lighting for the county’s parks, Leverette suggested. District 2 Commissioner Ross Morris said he liked this option but would like to see a dollar amount.

– The commission heard a report from Lee County Sheriff Jay Jones and Opelika Chamber of Commerce President and CEO Ali Rauch for the ‘Forward Opelika’ Initiative from the chamber.

– The commission voted to approve an appointment to the Cemetery Preservation Commission.

– Oline Price presented the annual report for litigations and insolvencies.

– The commission approved the purchase of 20 AR rifles for the Lee County Sheriff’s Office.

– The commission voted to approve a speed limit reduction for Lee Road 307.

– The commission voted to approve the final plat approval for the Gentry-Lee Road 37 subdivision.

– The commission voted to approve the final plat approval for the Broken Ridge Subdivision.

– The commission voted to approve Leverette as the duly authorized representative for the Beulah Park.

– District 4 Commissioner Robert Ham added an item to the agenda to provide an update on the Plainview Volunteer Fire Department, which needs assistance and asked the commission to consider options to help.

– Price asked to add an item to the agenda to approve a mapping position for Lee County: a certified mapper or in lieu of being an Alabama certified mapper, five years experience and a bachelor’s degree. The position is budgeted but the commission asked for more time to review and tabled the item.