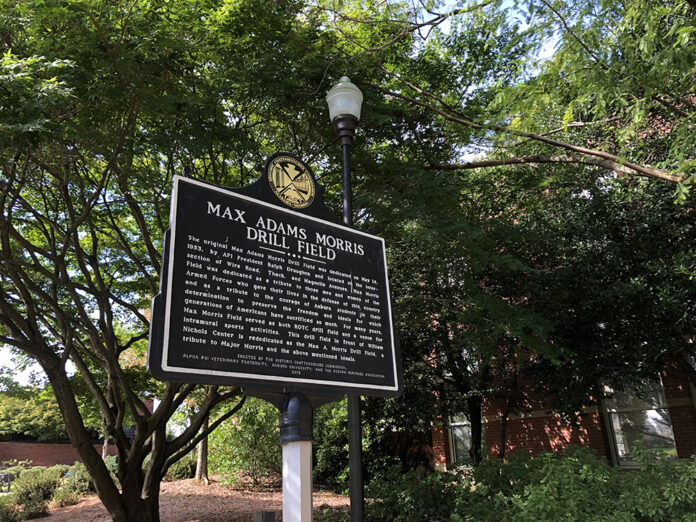 This Friday, a flagpole will be dedicated to Auburn’s only alumnus to carry the Missing in Action title.

“Max Addams Morris of Aniana, Alabama, was one of the greatest students ever to come through Alabama Polytechnic Institute,” said Charles Hendrix, vice president of the Auburn Heritage Association.

This year will be the 70th anniversary of his missing-in-action pronouncement, Hendrix said, and to honor Morris, a flagpole will be dedicated in his honor.

Morris was still a student when he was awarded the Carnegie Medal of heroism for saving the life of a fellow cadet at a summer training camp in Fort Benning.

The hero graduated from Auburn University in 1942 before his commission as a U.S. Army officer and eight years in service.

“He went on and fought bravely in World War II; he’s part of the greatest generation that ever existed,” Hendrix said.

Morris has a marker dedicated to his life already, located in front of the Nichols Center on Auburn’s campus.

“I think he’s one of the most underrated alumni we’ve ever had,” Hendrix said.

A ceremony will be held on Friday, Sept. 18 at 12 p.m., at the Pine Tucket Cemetery, to install a flagpole for Morris.

A United States flag and a POW/MIA flag will both be flown, Hendrix said.

“We’re going to be doing an official first flag raising,” he said. “I’ve got a gentleman from ROTC, a Marine Gunnery Sergeant, he’s going to be there to raise the flag. We’re going to be playing ‘To The Colors’, that’s as the flag goes up.”

The event will be held rain or shine, and masks are encouraged, Hendrix said. To enforce social distancing there won’t be chairs or tents, but there will be a short speech, and anyone is invited to attend, Hendrix said.