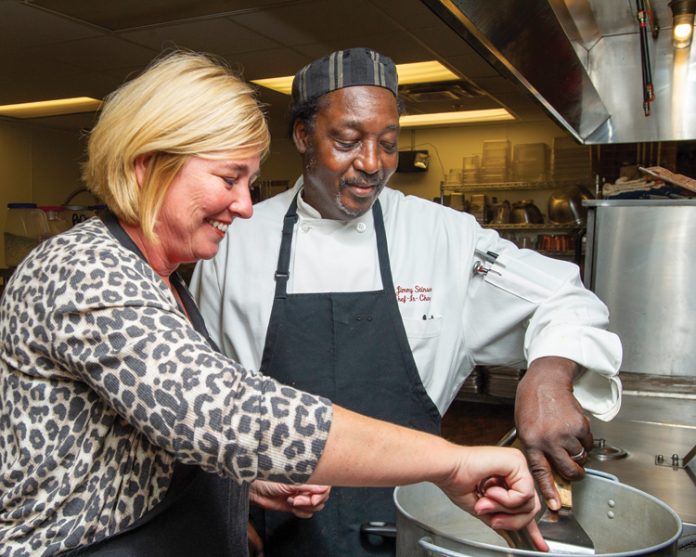 Eleven years ago, the structure at 614 N. Railroad Ave. that now houses the Bottling Plant Event Center was a shell of its current self.

“There were holes in the ceiling, and water was getting through. And there were lots and lots of rat traps,” venue owner Lisa Ditchkoff remembered of the structure’s condition when she purchased the property in 2009.

With an approved building loan fresh in hand, Ditchkoff began the process of restoring the structure to its former glory. During the course of a year, renovations were completed and she and her team had the facility ready to host its first event, a wedding held on May 2, 2010.

More than 10 years have passed that day, and the Bottling Plant Event Center is continuing to grow and expand its offerings, even in the midst of the COVID-19 pandemic.

Ditchkoff originally moved to Alabama in 2001, fresh off a nearly three-year stint as a case manager for Big Brothers Big Sisters of Stillwater in Oklahoma, and accepted a role within Auburn University’s College of Human Sciences. With a background in nonprofits and experience in event planning, she helped coordinate several events while working at the university, which led her to open her own business, Professional Event Planning Services.

As she began to grow in her career and make connections, Ditchkoff said she “fell in love” with Opelika. She eventually opened her first office in downtown Opelika for PEPS in the mid-2000s, and knew that she would like to find a larger venue for her business somewhere in that part of the city.

By the late 2000s, Ditchkoff said she knew she was ready to expand her business and find her own venue for hosting events. The old Coca-Cola facility across the tracks on North Railroad Avenue caught her eye, and she began the process of applying for loans to help secure the building.

With the country and globe embroiled in The Great Recession, finding financial assistance proved to be challenging, according to Ditchkoff. However, thanks to the efforts and trust of a locally known banker, she received her loan and began pursuing her dream.

It didn’t take long for Ditchkoff to build a solid reputation around the area, as her calendar began to fill up with events for concerts, conferences, proms and a host of other events.

While the business was succeeding, Ditchkoff said financial concerns weighed heavily on her during the first six years of operating the Bottling Plant. However, a two-night, sold-out comedy show in 2016 featuring then-breakout comedian Darren Knight (also known as “Southern Mama”) helped her erase the last of her debt, a moment she said she will never forget.

“I went out to dinner with Darren’s group, and they offered to cover the cost of the meal. But, I just remember telling them, ‘no, you’ve helped me,’ and explained to them that this event had helped push me over the edge and get out of that debt,” Ditchkoff remembered.

Later that year, the business was rebranded from Event Center Downtown to the Bottling Plant Event Center, and a partnership with the plant’s original tenant, Coca-Cola, was struck. Other changes have included the construction of a courtyard pavilion to offer space for hosting outdoor events, wine shop and recently hired Executive Chef Jimmy Stinson to help expand her business’s catering efforts.

The business’s reach extends as far as Lake Martin and Columbus, Ditchkoff said. In recent years, it has hosted a number of well-attended events, including the Opelika Chamber of Commerce’s Annual Meeting, comedians Chris Statham, Jody Fuller, Jermaine “Funnymaine” Johnson and James Gregory and concerts from a number of locally and regionally known artists and musicians.

Reflecting on the last 10 years in business, Ditchkoff credits her faith and the support of the Opelika community for helping the Bottling Plant become an integral part of the city’s downtown.

“I believe the success (of this business) has been because it has never been about me. If it were, I would have given up a long time ago,” Ditchkoff said. “Helping others has been all I’ve ever really wanted to do. It’s the reason I worked all those years in the nonprofits. It’s the reason I had the dream to own a unique venue.”

Currently, Ditchkoff, Stinson and her team are offering curbside pickup or delivery (within 60 miles) and wine options to patrons. For more information, call 334-705-5466, follow their Facebook page or visit bottling­planteventcenter.com.