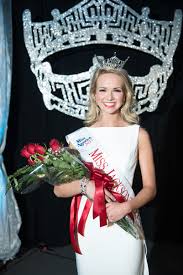 Nursing major Camden Swatts of Opelika was crowned Miss JSU 2020 during the annual pageant held at Leone Cole Auditorium on Jan. 10. She will represent the university at the Miss Alabama pageant this June. First runner-up went to Briana Caudle, a psychology and criminal justice double major from Huntsville.
“I am so thankful for the opportunity to serve and represent the university and people I love so much,” Swatts said. “God’s timing and plan are perfect, and I know he will continue to guide me through every step of this journey.”
This is not the first time Swatts has worn the Miss JSU sash. She also won the pageant in 2017, going on to place in the Top 12 in her first appearance at Miss Alabama. As Miss Auburn-Opelika in 2018, she won fourth runner-up at Miss Alabama and the swimsuit preliminary competition.
At Miss JSU on Friday night, Swatts won the talent portion of the competition for her jazz dance performance to “Ain’t Too Proud to Beg” by The Temptations. Her platform is Care for Cadets, through which she plans to engage the community in expressing gratitude to service men and women.
Swatts has served as a JSU Ambassador, is a member of Alpha Omicron Pi sorority and was elected to Homecoming Court 2018. She has been inducted into Phi Kappa Phi honor society and has made the Honor’s List several times.
JSU senior Darby Angle took her final walk as Miss JSU 2019 during the pageant and performed her crowd-pleasing talent from Miss Alabama one last time – a humorous tap routine to Dolly Parton’s “9 to 5.” It was announced at the pageant that she and parents Marc and Mary Angle, JSU alums, have established an “Act of Kindness” scholarship to be awarded to a special Miss JSU contestant beginning in 2021.
The pageant was emceed by Miss JSU 2011 Whitney Curtis Wolf, who earned a BA in music education in 2013. She resides in Birmingham, where she works as acquisitions editor for Kendall Hunt Publishing Company. Former Miss JSUs Amber Reid Reynolds (2002), Beth Milam Sewell (2012) and Lauren Reaves (2018) were in attendance to show their support. The pageant is directed by Dean of Students Office personnel Cody Beck, coordinator of student activities, and graduate assistant Kendal Garrett.
JSU women have a long history of success on the pageant stage. Seven Miss Alabamas attended JSU, including Miss America 1995 Heather Whitestone McCallum and 1979’s first runner-up and current JSU voice instructor Teresa Cheatham Crosby. Other Miss Alabamas who hailed from JSU include Ceil Jenkins Snow, 1971; Jane Rice Holloway, 1973; Julie Houston Elmer, 1977; Tammy Little Haynes, 1984 and Jamie Langley, 2007.