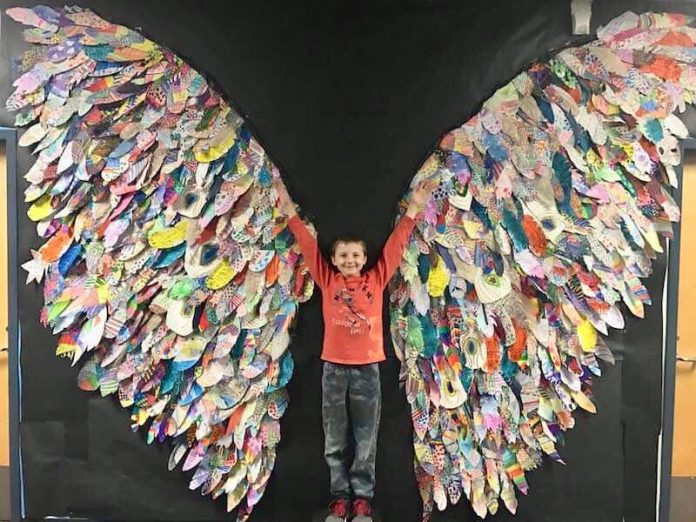 Beauregard artist and resident Rachel Wright is nearing completion on a piece that will celebrate the lives of the 23 individuals who lost their lives in her community during the March 3 tornadoes.
Following conversations with survivors and victim’s families, Wright said she was inspired to create a piece of art that she and the entire Beauregard community could help create.
“I wanted to do something that was beautiful and all-encompassing, as well as something that people affected by the storm could participate in. Then (one of the victim’s family members) talked about ‘their angel,’ and it just clicked for me right there,” Wright said.
The piece will include oval, hand-painted pieces of canvas applied to angel wing shaped pieces of plywood. Wright has distributed pieces to adults and children alike, encouraging them to paint in a way that best expresses themselves and emotions regarding the events of March 3.
Survivor Kayla Grimes and District 38 Rep. Debbie Wood are two of the more prominent individuals who will be contributing to the piece.
Final touches on the piece will be applied during this weekend’s “Love Lee Day” event from 10 a.m. to 2 p.m. at the Opelika Sportsplex. Once finished, the piece will become a permanent installation at Sanford Middle School. People will be able to take photos with the piece and are encouraged to share them on their personal social media.
Wright said that the significance of the piece remaining at the school not only serves as a remembrance of the victims but a reminder of the important role the school played in the immediate aftermath and following recovery from the storms.
“Seeing everyone come together to help make this has been so beautiful to watch. I believe it will also serve as a piece of therapy for those who were affected in any way by the storms too,” Wright said.
For more information, like and follow Wright’s Facebook page “Art by Rachel Wright.”