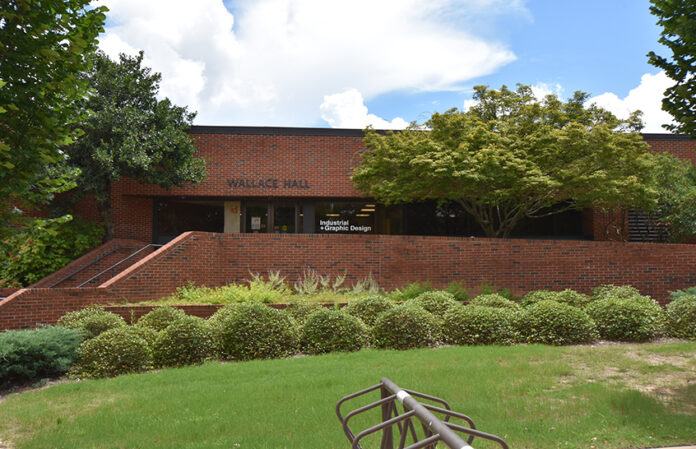 The Auburn University Board of Trustees voted on a recommendation from the Trustee Task Force to place a plaque outside of Wallace Hall during its meeting Friday morning.

The Trustee Task Force recommendation came after clamoring from students and the public to rename Wallace Hall. Instead, the recommendation was to place a plaque with more information in front of the hall.

“The request that we’ve received most frequently in terms of the building that has been identified as being one of interest for this purpose most often is the Wallace [Hall],” said District 9 Trustee James Pratt. “So we’re going to address that today and make a recommendation.”

Wallace Hall, located at 210 S Donahue Dr., is in the heart of campus, right near Jordan-Hare Stadium.

The Trustee Task Force was formed last summer, in the wake of George Floyd’s death, with the purpose of evaluating the names of buildings around Auburn’s campus.

Over a year ago, a change.org petition was created with the request that Auburn rename Wallace Hall.

“Auburn University’s campus holds buildings named after very honorable and influential people within the state of Alabama: Helen Keller, James E. Foy, Katherine Cooper Cater, etc. Among these buildings is Wallace Hall which was named after George Wallace, the former governor of Alabama,” said Ashley Henton, creator of the petition. “As governor, Wallace promoted and encouraged segregation between black and white people, he tried to stop public schools in Alabama from integrating, and he personally stood in the way of two black students at the University of Alabama to stop them from registering for classes.”

“On May 31st, in response to the unjust murder of George Floyd, Auburn University tweeted, ‘While we acknowledge the painful reality that prejudice and bigotry exist, we stand resolute that they have no place in the Auburn Family. As an institution that values and embraces each individual, we oppose hate and exclusion and acts that promote them,’” Henton said. “Having a racist governor that was so against integration in schools be forever immortalized on Auburn’s campus directly contradicts this statement.

“In order to make true on their word, I’d like to publicly ask Auburn University to rename Wallace Hall. There are countless influential people, especially people of color, that are related to Auburn University and the state of Alabama.”

The building has been standing since 1984.

The plaque will read:

“Wallace Hall is named after George Corley Wallace, four-time governor of the State of Alabama and was erected on Auburn’s campus in 1984. The life of Governor Wallace was one of great complexity from his early actions as a self-described segregationist to his later life when he apologized for his words and deeds promoting segregation. In his last election as governor of Alabama, in 1982, he won with more than 90 percent of the black vote. The complexity of Wallace’s legacy has been an ongoing conversation for decades. Auburn’s obligation as an institution of higher education is to promote challenging conversations, which is a valuable component of the academic process.”

District 6 Trustee Elizabeth Huntley said that there is no timeline right now as to when the plaque will be erected and that that will be the responsibility of the facilities department.

Huntley said that the task force did ask local student and community groups about the renaming process.

“We’ve met with several stakeholders … newly formed African-American advisory committee, with African-American student leaders, with members from the NAACP, state chapter, so yes we’ve heard from various groups,” Huntley said. “Let me be clear, that’s just overall in general, not specific to any particular building but just on the process.”

She said that this does not mean the task force discussed the plaque in front of Wallace Hall with these local groups, however.

“It was a balanced decision and looking at recognizing, we needed to state the facts, state the facts about Wallace and being transparent about it,” Huntley said.

Pratt said that the decision was made without regard to the personal opinions of those on the task force, pro or con when regarding Wallace.

“The task force took the request to evaluate certain names very seriously,” Pratt said. “This is a very serious issue for students, for faculty and for all of the Auburn family.

Pratt said that the task force looked into the history of Wallace’s views, opinions and decisions when evaluating the decision.

“The goal is to be fair, objective and to try to do the right thing for Auburn University,” he said.

Huntley said that the task force reviewed Wallace’s views both when he was for segregation and when he later recanted his views. Public civil rights leader John Lewis forgave Wallace but admitted he could not forget his actions, Huntley said.

“As a result, our task force came to the conclusion that the full historical of Wallace’s political career must be acknowledged through the contextualization of the Wallace Building,” she said. “We simply must tell all of the history.

“… What we want is for Auburn students, perspective students and African-American alumni to walk on this campus and begin a campus tour, which will now begin at this enhanced historical marker for Dr. Franklin and know that this a university for everybody and that’s the message that we will send.”

However, Simelton said he doesn’t believe Wallace needs to be contextualized.

Simelton acknowledged Wallace’s recantation but said that history should show his actions as a segregationist as well.

“The NAACP is, of course, more of the opinion that that building should be named after someone who is, in our opinion, more deserving than George Wallace,” he said.

Naming the building after Harold Franklin, like Henton suggested in her petition, is something the NAACP would support, Simelton said.