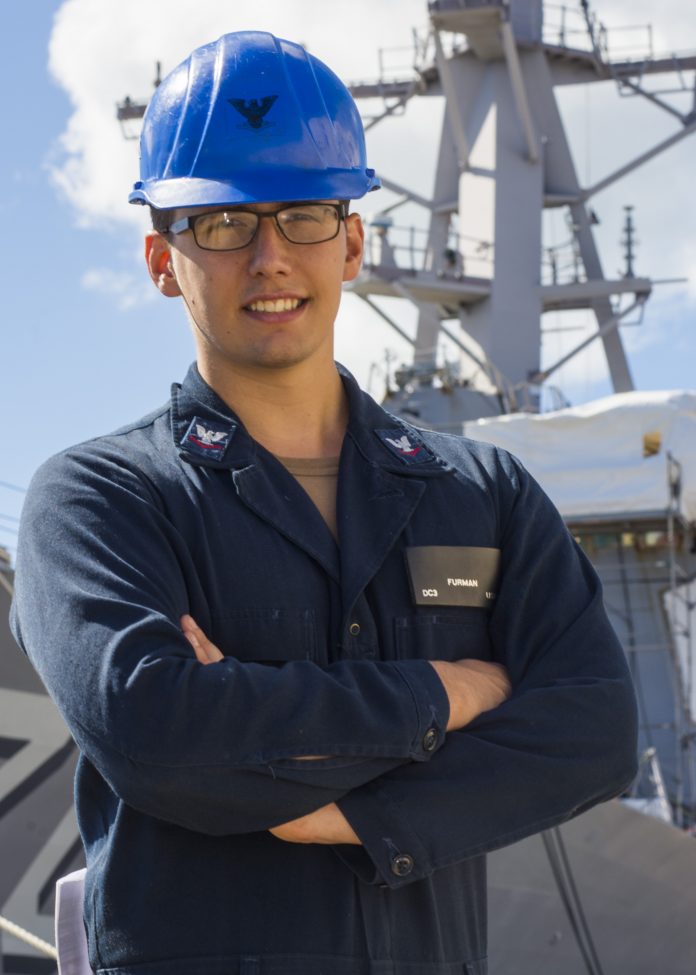 There’s a U.S. Navy ship unlike most floating in the waters of Joint Base Pearl Harbor-Hickam. It’s a Navy warship that honors the name of a female who has set the standard of excellence for those who have followed.
During this women’s history month of March, an Auburn sailor and 2015 Auburn High School graduate is serving aboard USS Hopper, named for Rear Adm. Grace Hopper.
Petty Officer 3rd Class Adam Furman has served in the Navy for two years and works as a Navy damage controlman, serving aboard the Pearl Harbor-based guided-missile destroyer.
Furman credits success in the Navy to many of the lessons learned in Auburn.
“Everyone back home is super polite and I learned to always treat people as you want to be treated,” Furman said. “When my family was moving in to our new house all of our neighbors either brought over food or helped us move all of our things in. Seeing people go out of their way like that has rubbed off on me. In the Navy, I always try to display that hospitality by going out of my way to help people in need.”
The sailors’ jobs aboard USS Hopper are highly specialized, requiring dedication and skill. The jobs range from maintaining engines to handling weaponry along with a multitude of other assignments keeping the ship mission-ready at all times.
As a Navy damage controlman, Furman is responsible for performing and training first response and damage control to the crew to combat any accident which may occur on the ship while inport and underway.
More than 300 sailors serve aboard the ship named for the pioneering computer scientist who served in the Navy for 43 years.
Though Rear Adm. Hopper joined the Naval Reserves in 1943 after being an associate professor of mathematics at Vassar College, he retired from the Naval Reserve with the rank of commander at the end of 1966. She was recalled to active duty in August 1967 for a six-month period that turned into an indefinite assignment. From 1967 to 1977, Hopper served as the director of the Navy Programming Languages Group in the Navy’s Office of Information Systems Planning and was promoted to the rank of captain in 1973. Hopper was promoted to commodore by special Presidential appointment in 1983. In 1985, the rank of commodore was renamed rear admiral lower half. She retired from the Navy on Aug. 14, 1986. Owing to the breadth of her accomplishments and her naval rank, she is sometimes referred to as “Amazing Grace.”
“It’s been an honor serving onboard,” added Furman. “It’s a pretty surreal experience where you have to adapt to anything that may pop up to complete maintenance and to keep the ship looking good.”
Navy guided-missile destroyers are multi-mission ships, equipped with tomahawk missiles, torpedoes, guns and a phalanx close-in weapons systems, that can operate independently or as part of a larger group of ships at sea.
Being stationed in Pearl Harbor, often referred to as the gateway to the Pacific in defense circles, means Furman is serving in a part of the world that is taking on new importance in America’s focus on rebuilding military readiness, strengthening alliances, and reforming business practices in support of the National Defense Strategy.
“Our priorities center on people, capabilities and processes, and will be achieved by our focus on speed, value, results and partnerships,” said Secretary of the Navy Richard V. Spencer. “Readiness, lethality and modernization are the requirements driving these priorities.”
The Pacific is home to more than 50 percent of the world’s population, many of the world’s largest and smallest economies, several of the world’s largest militaries and many U.S. allies. The Navy has been pivotal in helping maintain peace and stability in the Pacific region for decades.
Though there are many ways for sailors to earn distinction in their command, community, and career, Furman is most proud of earning being meritoriously advanced to the rank of petty officer third class.
“I was about to take the third-class exam and the command had a picnic where the leadership told us who was being meritoriously advanced,” Furman said. “I didn’t expect it at all! It was just a nice surprise for the hard work I’ve done.”
Serving in the Navy is a continuing tradition of military service for Furman, who has military ties with family members who have previously served. Furman is honored to carry on that family tradition.
“My grandfather was in the Air Force and my dad served in the Israeli army,” said Furman. “I always looked up to their work ethic. I want my future children to look up to me the same way I look up to them.”
As a member of one of the U.S. Navy’s most relied-upon assets, Furman and other sailors know they are part of a legacy that will last beyond their lifetimes providing the Navy the nation needs.
“I feel like serving in the Navy is like being in a big family full of people who will always be there for you,” added Furman. “The traditions that we all uphold makes it feel like we have big shoes to fill. It’s really been a great experience.”