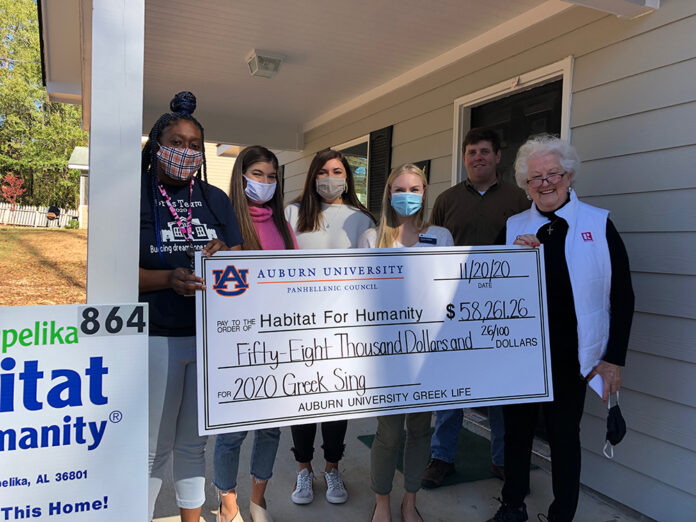 Contributed by
AO Habitat for Humanity

On Nov. 23, Auburn Panhellenic presented Auburn Opelika Habitat for Humanity (AOHFH) with a $58,356 check to sponsor building Habitat homes 69 and 70 in Auburn.

This year Panhellenic was unable to have the traditional Greek Sing fundraiser due to safety concerns and COVID-19 restrictions. Though it were forced to cancel the fundraiser this year, it was still able to successfully raise funds for Auburn Opelika Habitat. This goes to show that the pandemic did not stop Panhellenic, as it overachieved by raising even more than the amount raised last year. The dedication that this group of amazing girls has for this organization is truly a blessing.

Panhellenic also volunteers each spring to work on Habitat homes. Earlier this year, Panhellenic partnered with Habitat and The Way2Serve Ministry to repair and rebuild homes in our community. Approximately 40 students from different sororities worked with Habitat construction leaders to repair a deck and wheelchair ramp, clean and prep floors for repair, build a shower access step and repair a back door on a local home.

Over 100 Panhellenic volunteers also partnered with Habitat for Humanity to assist with volunteer projects this year during February. Additionally, last year, they helped frame Auburn Opelika Habitat home No. 67 and were also a major sponsor on Habitat home No. 68, both in Opelika.

The following is a statement from AO Habitat for Humanity: “Thank you Auburn University Panhellenic for consistently supporting Habitat each year. Your partnership is very valuable to this ministry. We truly appreciate your dedication to helping Habitat fulfill our mission, your efforts to exceed last year’s fundraising total and everything you have contributed to this organization. Together we build homes, community and hope.”