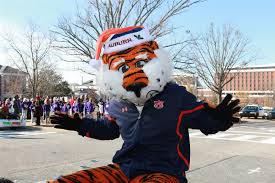 The Auburn Downtown Merchants Association will host the annual Christmas Parade in downtown Auburn on Dec. 8 at 2 p.m. The parade will feature more than 60 businesses or organizations. The parade will follow the same route as it has in the past.
“The Christmas Parade is one of the best holiday traditions in our local community,” said Downtown Coordinator Jessica Kohn. “You will see a lot of local favorites as well as some fun, festive holiday floats … we have a fun surprise planned for the end of the parade, so we (encourage guests) to be sure to stay until the end.”
It will begin on the Thach Concourse, travel down South College Street, east on Tichenor Avenue, North on Gay Street and then west on Thach. The parade will feature all of the local favorites including Aubie, the Auburn High School Marching Band, Auburn Fire Department and Santa. The Auburn Downtown Merchants Assciation will also host the Holiday Open House that Sunday.
“We also decided to host our Holiday Open House on the same day in hopes that patrons will come early or stay later to get some holiday shopping done,” Kohn added.
The open house event will feature extended shopping hours, merchant specials and several fun holiday activities such as a giant, interactive snow globe.
For more information on the parade and other downtown events, visit downtownauburnonline.com.