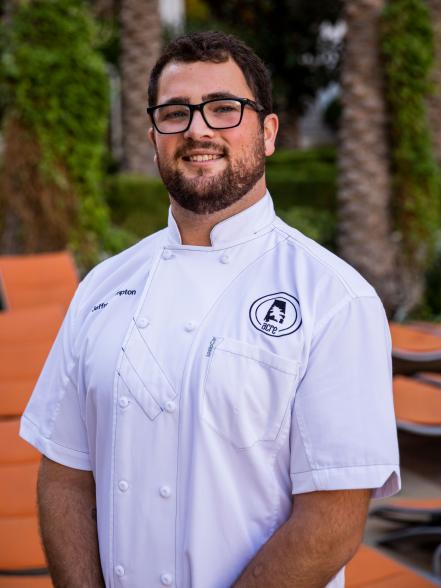 Jeffrey Compton, Acre’s chef de cuisine, will be one of 10 chefs competing for culinary glory on the new Food Network series “Vegas Chef Prizefight,” which will air on March 5.
Hosted by fellow chef and television personality Anne Burrell, the competition will place these chefs “on the toughest job interview of their lives” to be chosen as the head chef “at the brand-new, $10 million restaurant at the Flamingo Las Vegas, right on the strip.”
Each week, Burrell will place chefs in a different restaurant within the Caesars Entertainment empire where they must take over a busy dinner service to prove they have the talent, leadership and determination to run a high-profile restaurant in Las Vegas, one of the biggest food cities in the country.
With clashing egos, extraordinary dishes and unexpected twists and turns, the six-episode series mirrors real-life entry into the storied world of first-class restaurant kitchens. Restaurant experts Scott Conant and Regional President of Caesars Entertainment Eileen Moore, along with other special guests, join Burrell in every drama-filled episode to determine who moves closer to getting a job offer that will alter the course of their career.
“The stakes are incredibly high in Vegas Chef Prizefight – winning this show will literally change someone’s life, so there are real consequences for each dish,” said Courtney White, President, Food Network and Cooking Channel. “Anne’s experience in exclusive restaurant kitchens makes her the perfect chef to lead this search – she knows the skill, creativity and temperament needed to thrive in this world.”
Other competing chefs are: Brittney Brown (Detroit); Julia Helton (Chicago); Jeff Kraus (Tempe, Arizona); Janey Lyu (New York); Lamar Moore (Chicago); Roshara Sanders (Bridgeport, Connecticut) and Juan Zepeda (Denver).
In the premiere episode, Burrell and the chefs arrive at Caesars Test Kitchen and must show their culinary point of view using an ingredient beloved by high rollers and vacationers alike. They then proceed to an evening takeover of BLT Steak at Bally’s Las Vegas where Burrell, Scott, Eileen and guest Cliff Crooks determine which chef becomes the first to go bust. Upcoming episodes include a Mexican-inspired dinner at Guy Fieri’s restaurant El Burro Borracho at Rio All-Suite Hotel & Casino featuring Hunter Fieri; a theater-worthy food spectacle with guests Penn Jillette, Maximillian Chow and Chef Dicky Fung at MR. CHOW at Caesars Palace; brunch battle at restaurant GIADA at The Cromwell Las Vegas with Giada De Laurentiis’s head of culinary operations Lish Steiling and a fine dining excursion at Michelin star-starred Restaurant Guy Savoy, the crown jewel of Caesars Palace. In the super-sized 90-minute finale on April 9 at 10 p.m., the last chefs standing go head-to-head and only one will be offered the head chef position at the Flamingo Las Vegas.
Fans can head to FoodNetwork.com/VegasChefPrizefight for exclusive videos with Burrell, food challenges with the judges plus Q-&-A’s. Track the dishes you won’t want to miss! Track the competition each week using #VegasChefPrizefight.
The premiere episode will air at 10 p.m. Eastern time on the network.