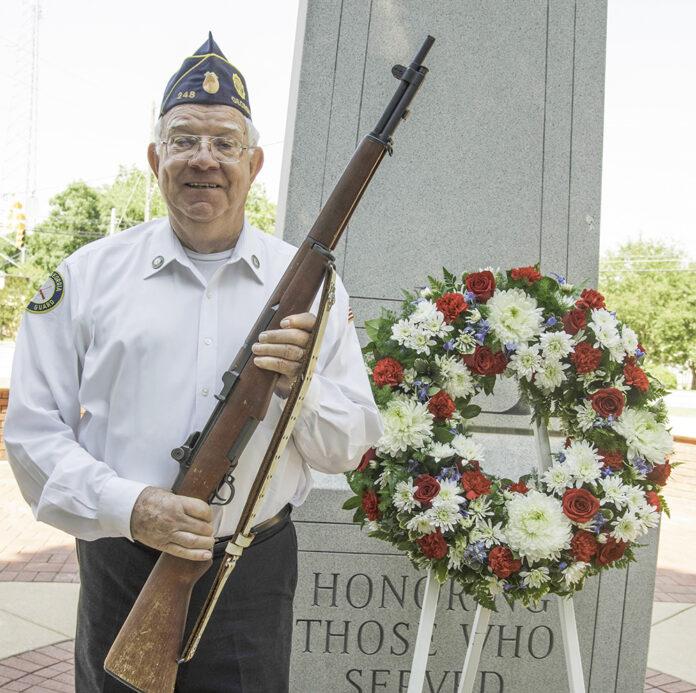 Memorial Day is normally recognizable by the beach trips, cookouts and lazy lake days celebrated as we welcome summertime. But today I had the honor of attending the Mayor’s Memorial Day Breakfast at the Auburn University Hotel and Conference Center in downtown Auburn, followed by the memorial at the Veterans monument on Ross.

While the event at the hotel was a beautiful event and the staff at the hotel and the mayor’s office did a terrific job with this event, the highlight was three gentlemen I met while waiting for others to arrive at the monument. I had the honor of talking with them about their lives and their service. And today, I would like to tell you about them.

As I walked up, these two older gentlemen in uniform come up to me to shake my hand and introduce themselves. Damon and Ron Wallace asked me to take some photos of them in uniform with their rifles and to talk for a few minutes. Damon asked me if I knew what the pin on his hat was for, I reluctantly told him that I did not because my family didn’t have a heavy military background. He said “That’s alright, I’m gonna tell you if you don’t mind.”

Then he tells me of his brothers, gestures to Ron and his brother, and then about his son. His son was a fallen soldier that had recently been laid to rest in Town Creek Cemetery. After I took the photos I thanked him for sharing his story with me. Ron asked if he could have some photos as well, he was here from Tennessee to be a part of our ceremony. I handed them my card and quite honestly expected that to be the end of it.

Moments later Ron is waving me over again, asking me if he can talk to me for a moment in the shade. I obliged, and he proceeded to ask me the story behind each of my visible tattoos, and told me he will remember this forever. He told me of his time working for Delta at the Atlanta Hartsfield-Jackson International Airport, how many beautiful and interesting tattoos he had gotten to see and the wonderful stories he had heard while working there. He then tells me he wants me to know that I am loved by at least one person and that one person was him.

In a world full of hate and anger, it can get easy to judge others based off of appearance or the crowd they are associated with, but how wrong we can be. I didn’t leave my house this morning expecting to have any meaningful interaction with the attendees of this event, but I was wrong.

What that man said to me will be with me forever. He cared enough to tell me I mattered even though it could’ve been very poorly received. As we remember those who have fallen for their service, take a moment today to be kind to a stranger. You don’t know what others have weighing on them and simple kindness can change the course of their entire day. This kind man spoke to me with passion and empathy and I will never forget it. Thank you to all who have served in our military. And to Ron Wallace, I will never forget you either.