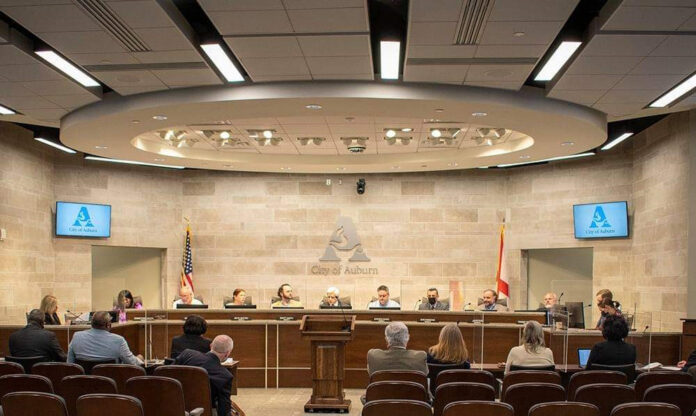 The redistricting back-and-forth in the city of Auburn is over. The Auburn City Council approved the city’s map during a special-called meeting Tuesday night, rather than the map the local NAACP branch asked the city to consider.

Redistricting has been a public discussion in Auburn since December when the city’s map was presented to the council.

At that time, members of the local NAACP branch, #5038, reviewed the map and presented a new one — with changes, including a second minority-majority district.

The city of Auburn has one minority-majority district and that is what the city’s plan proposed as well for this redistricting process.

Redistricting is the process of redrawing lines to reflect the city’s growing and changing population. For more on this process, click here: https://opelikaobserver.com/auburn-purchases-equipment-for-dinius-park-postpones-redistricting/.

The council was set to vote on the city’s map on Dec. 21, however, NAACP members urged the council to postpone. So, the vote was postponed to Jan. 4 and then again to Jan. 18.

Additionally, City Attorney Rick Davidson spoke to council members, along with Dorman Walker who assisted the city with the redistricting process on Jan. 18. Finally, M.V. Hood III, professor of political science and director of survey research center at the University of Georgia, was asked to provide feedback based on the data for the city.

Hood shared with the council that based upon numbers and data, there is no evidence of vote dilution in the city of Auburn.

When redistricting is challenged in court, a process the NAACP has threatened against the city of Auburn, the Gingles test is used to determine if a city has created a map with problems.

And Hood said that based upon the data he analyzed, the NAACP map does not meet the criteria for the city.

Members of the public, at more than one meeting, presented allegations against Walker that he had been involved in redistricting processes that were examples of racist gerrymandering.

Walker defended himself at the Jan. 18 meeting and City Manager Megan Crouch informed the public that the city council did not hire Walker, nor has the ability to fire him, as had been suggested by members of the public.

“The system for and the process that we use here in Auburn for redistricting is broken,” said NAACP #5038 President Billy Allen. “People have said that to you guys. It’s broken. There should be a more extensive involvement of the citizens before the map is drawn, no stakeholders should be eliminated and we should also maybe piggyback, look at other cities in the state of Alabama, like Mobile, like Huntsville, how they conduct their redistricting.”

Allen said that the NAACP map is not illegal and the group “stand[s] behind our map”.

A Montgomery-based cartographer that the NAACP hired to assist with the redistricting process, Tabitha Isner, said that the city can avoid a lawsuit from the NAACP.

“[There’s]time to avoid the perception or reality, either way, does it way, the perception or the reality that minority power is being diluted in Auburn,” Isner said. “Let’s avoid going to court, let’s avoid litigation, let’s honor the minorities in this community by voting for a map which is, in fact, legal.”

There was one citizen who spoke during citizens communications against the NAACP’s proposed map and the organization itself. However, that citizen was escorted out of the municipal building by officers. Rather than repeat his comments, they can be found in the city’s archived meeting. The link is included at the bottom of this article.

“We live in a region with such a history that we continue to say weighs upon us but we don’t even acknowledge that,” said one citizen, Warren Tidwell. “We have centered the voices of the white folks involved in this while minority folks have stood here and all but begged you to see this through their eyes.

“I’m pretty sure no minorities were involved in drawing the maps for the city. I know none were hired to advise the city so they could present a map to a body that has one minority who’s people have been oppressed in this country.”

The public hearing was closed after close to an hour and the council began discussing the issue as a body.

Ward 5 Council Member Steve Dixon proposed an amendment to the city’s map — to substitute it for the map produced by the NAACP — which was seconded by Ward 1 Council Member Connie Fitch Taylor.

He then proposed an amendment to the amendment, moving Census Blocks A and B on the NAACP’s map. Taylor again seconded.

“This change causes the alternative map deviation between the wards to go from 5.8 to 6.0,” Dixon said. “A group of citizens of Auburn came together that created a map that they believe is more fair and more equitable for everyone in Auburn and I believe in that as well. I am not opposed to the map presented by the city, however, the map developed by the city of Auburn changes the dynamics of Ward 5 greatly.”

However, Dixon’s amendment to the amendment failed.

Taylor then asked the city to clarify whether the NAACP’s map was legal or not.

“It may be a lawyer thing,” Walker said. “I don’t think I would call the map illegal, I’d say it doesn’t comply with the law, which may be semantics to everybody else.”

Walker said there are three problems with the NAACP map. The Ward 6 population is not sufficient enough for a second majority-minority district.

He said that looking at voting age population, the district is still majority white.

Walker also said that the NAACP’s map relied on an aggregate of minorities, rather than focusing solely on the Black population.

“Different minorities may be combined to form a majority in a minority-majority district but only where there is a showing that they act cohesively in a political manner,” he said. Which, Walker said, there is no evidence of in Auburn.

He then said that by taking some of the Black population from one Ward and moving it into another, the end result could be no Black representatives on the council, come the next election.

The amendment to substitute the alternative NAACP map for the city’s map failed, 7 to 2, Dixon and Taylor voting for the substitution.

Parsons said he had heard from citizens and felt that the new Ward 5 housed too much of the student population, echoing a comment Dixon had made earlier in the meeting.

City officials, and Crouch, explained that the citizen request and the subsequent changes to the map, where within legal bounds.

Ward 2 Council Member Kelley Griswold then proposed an amendment to move census blocks on the south side of Bragg Avenue, East and North sides of Warrior Court, west side of North College Street and South side of Mitcham Avenue from Ward 5 to Ward 2.

“This change brings the entire historic district into the same ward,” Griswold said.

This amendment was also reviewed by the city, seen to be legal and was passed by the council.

“I want to acknowledge the NAACP’s efforts and all that has gone into identifying an alternative map and I want to applaud the group for those efforts,” Witten said, before the vote on the city’s map. “I think it was a very important process for us to be a part of an involved in.”

She then took time to say that while she has heard the constituents in their complaints of a broken redistricting system in Auburn, she believes that there has been ample opportunity for citizen comment, in the form of citizens communications, public hearings, postponed meetings, zoom meetings, ward meetings and organization meetings.

“I don’t believe any of us sat up here and thought, ‘oh no, we’ve got to hear again from the citizens,’” Witten said. “I think we have all taken this to heart, we have had sleepless nights, at least I have, with regards to these maps. And I do not make this vote lightly tonight, but I do leave this dias, tonight knowing that if we vote in the city map, that we have a good fabric for the next ten years.”

Mayor Ron Anders praised the staff and city manager for their efforts and the work they put into the redistricting process.

“This council first heard from the city manager in late July with a proposed timeline and a process for redistricting,” Anders said. “It reflected the same process that’s been used in this city for multiple generations. We learned that the data was expected from the Census Bureau by Aug. 12 and because that data provided by the Census Bureau required some processing to become useful, we had that data in September. And 60 days later, our staff had put together a proposed map for us to consider.

“This map was presented to the council, and to the public, on Nov. 10, almost three months ago. Since then, we’ve invited citizens to two different open houses in two different areas of town. At both of those meetings, we had staff there who could answer any questions on the maps, the data, the legal requirements or process.”

Anders said that the public hearing was advertised as well, and a second one was held on Jan. 18.

He echoed Witten’s sentiments of listening to residents privately as well.

“We’ve postponed a vote on this three different times … so we could keep listening primarily to what our residents have to say,” Anders said.

He said that based upon legal counsel, the NAACP map would dilute the Black vote.

“So please hear me on this, if this council votes to pass the city’s redistricting plan as it stands today, it’s not because we refuse the alternate plan creating a second district, but rather because our legal and data analysis show that the alternate map does not accomplish this goal and could damage or dilute the voting integrity of our community in Ward 1,” Anders said.

“… I will never tell you that Auburn is a perfect community, we’re not. We will always have things to work on, but we’ve got a lot to be proud of. And it’s my hope, and prayer, that what’s happened here over the last month and a half can be turned into a positive and we can come together and we can lock arms and we can continue to make Auburn an even better place for all of its citizens for the future.”

The council vote passed 7 to 2; Dixon and Taylor against.

The full meeting can be found here: https://www.youtube.com/watch?v=nAr3O8zA8U8&list=PLEbh13b5QRe4meBFcMAEXDdU_Fpwt788I&index=1.