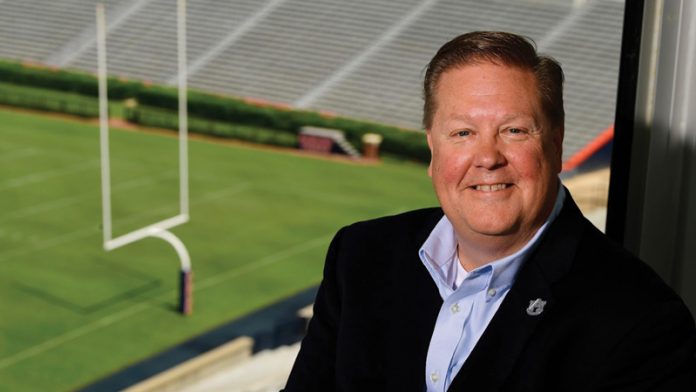 Publisher’s Note: This week marks one yaer since Rod and Paula Bramblett died in a tragic traffic accident.  While this piece is about the Bramblett’s dear friend and co-worker, Andy Burcham, we would be remiss if we did not take a moment to honor Rod and Paula’s memory.

“Our whole lives are planned around the sports calendar, that’s how Andy marks time,” says Dr. Jan Burcham, Associate Dean for the College of Education at Columbus State University and wife of the voice of the Auburn Tigers, Andy Burcham. But what happens when there are no sports? When people are confined to their homes, how do we pass the time? That’s the question that the Burchams, and most of the world, are asking themselves right now.

It was about 3 p.m. on a humid spring day when Andy answered the phone. Perhaps he was sitting in an oversized, plush blue chair, dressed from head to toe in orange and blue and surrounded by tributes to Auburn’s glory days of old. In reality, he is at the grocery store. Burcham has been a steady presence on Auburn broadcasts since 1988, when he began play-by- play for the women’s basketball team. Burcham was promoted to voice of the Auburn Tigers in August 2019, when Rod Bramblett and his wife Paula were tragically killed in a car wreck. In March 2020, his first year in the top job was abruptly halted, like a raspy alarm that interrupts a cozy Sunday afternoon nap.

“We were at the SEC basketball tournament in Nashville when this all went down,” said Burcham.

He was ready to call his first Auburn men’s basketball tournament game, but life and anunforeseen global pandemic had other plans.

“Jan went with me –– we checked into the hotel, had a nice meal –– and by the time I walked back to our hotel room, it was pretty well decided that there would be no SEC tournament,” said Burcham.

The notification came shortly after that not only the NCAA tournament has been canceled, but all the spring sports have been cancelled too.

“It’s a massive adjustment for all of us,” said Burcham. “I went from calling four or five games a week plus Tiger Talk, to no games, not until this fall at the very least.”

Burcham has no games left to call; meaning the fans, coworkers and radio are left without a familiar and reliable voice.

“He’s professional, respectful, prepared, and excellent at describing the action.” said Brad Law, Burcham’s broadcast partner for Auburn baseball games. The pair were just 18 games into their first season together before the curveball that is coronavirus ended their run.

Brit Bowen is Burcham’s successor as Auburn’s play-by-play announcer for women’s basketball and softball: he sees Burcham as the ultimate professional. “He’s direct, honest and dependable,” said Bowen. “He takes pride in his work and he is always prepared.” Yet, there was no way Burcham could have prepared for this.

Disappointment looms in Burcham’s normally jovial voice. “The reason I got into this business was the games,” he said, before adding optimistically, “We’re still finding ways to come up with content. I’m fortunate that all I’m having to deal with is the loss of ball games.”

That perspective is just a reflection of his mindset.

By all accounts Burcham possesses the genuine qualities that make him a great interviewer, co-worker and friend. “As a person, Andy has a gift for connecting with people,” said Law. “The focus is never on him.”

Bowen, who learned under Burcham for six years, now views him as a mentor.

“Andy has always paid his success forward,” said Bowen. “He is always willing to help.”

Burcham grew up in Nashville, Illinois with an eye for sports and an ear for music. Growing up, his favorite team was the St. Louis Cardinals. In the fall of 1967, they won the World Series. His dad returned home one day with a record of the highlights of their season.

“It was my team! I listened to that non-stop, front and back,” said Burcham.

The recording was of Hall of Fame announcers Harry Caray and Jack Buck, whom Burcham said he modeled his career after. “That was my initial inspiration for becoming a broadcaster,” said Burcham.

At 11 or 12 years old, Burcham’s burgeoning passion for media heightened when he received a tape recorder from his grandmother.

“I would sit upstairs with my brother and pretend like we were on the Tonight Show with Johnny Carson, said Burcham, I would be the one doing the talking.” Caray and Buck got the same treatment.

Burcham’s life centered around sports, but his interests extended beyond that. He played baseball and football throughout his high school career but when he wasn’t listening to or playing sports, he was a baritone in the school band.

“My mother played piano and dad was the choir director at church,” said Burcham. “Music has been a big part of our lives.”

Burcham still carries his harmonious touch with him today. “He makes up songs when it’s just us and sings to the dogs and me,” said Jan. “He’s got that goofy side, and he doesn’t show that to a lot of people.” On their road trips to cover games, Burcham and Bramblett often enjoyed playing “name that tune” or their own version of carpool karaoke.

Burcham and his wife are “amateur foodies and big pet people,” said Jan. They enjoyed traveling and entertaining with friends.

Today, Burcham is learning to help from home, and he and Jan are finding ways to take advantage of their newfound spare time. The two enjoy putting together puzzles, cooking and building adult LEGO kits.

“There is a James Bond car that’s supposed to be really hard and we haven’t started it yet, I think we are both kind of afraid to,” admits Jan.

They have two dogs now, a beagle named Taylor and a 10-year-old shih-poo named Cooper. Are the dogs faring well during quarantine?

Jan takes a calculated pause, “they tolerate each other,” she jokes.

They are also catching up on their television shows. The one they are watching now, “Homeland,” is an eight season thriller that just recently aired its’ series finale.

“Although, there’s not much that’s redeeming about it, so the next series we watch we’re going to pick something a little more positive,” said Jan.

The Burcham’s don’t have any children of their own but are the guardians of Joshua Bramblett.

Joshua lives with the Burchams and the pandemic has given rise to a new affinity for baking.

Shelby Bramblett, a junior at Auburn University, is safely handling the pandemic away from home; she too is considered a piece of the Burcham family.

When talking about family and considering the amount of damage caused by COVID-19, sports can be deemed… non-essential. However, sports are an exemplary form of the escape and companionship that is valuable when experiencing such hardship and loss.

What did Burcham take for granted most pre coronavirus? “It’s the camaraderie with the people that I work with,” he said.

That’s something that we are all feeling. Normally, each day may feel like a grind. You hear your co-worker talking your head off, your boss won’t leave you alone, your friend keeps calling and the clock on the wall just will not tick fast enough.

Ironically, these are things we miss the most –– when time stops.