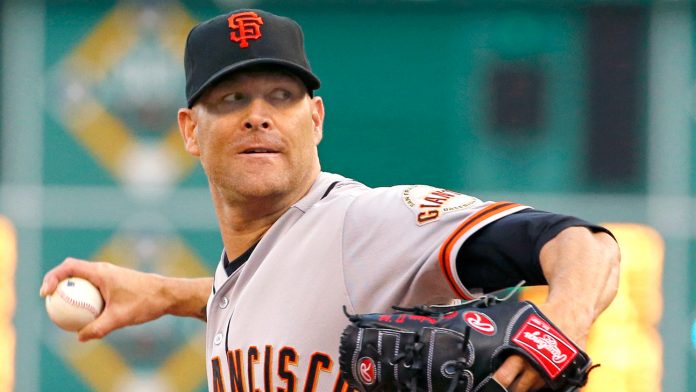 Former Auburn great and 17-year MLB veteran Tim Hudson has been named the volunteer assistant and pitching coach for the Auburn baseball program, head coach Butch Thompson announced last Tuesday.
“Tim has already impacted Auburn baseball, Auburn University and our community enough to last a lifetime,” Thompson said. “But amazing people always seem to have more to give, and that couldn’t be more true for Tim and Kim Hudson.
“I’ve never been more excited for our current pitchers and future recruits to be able to learn from one of the best competitors of all time,” Thompson added. “I believe Tim’s experience makes Auburn the premier pitching development experience in amateur baseball. Adding Tim to the mix with Chris Joyner, Anthony Sandersen and Blake Logan will form an elite group of teachers.”
As a whole, Auburn’s coaching staff has not only made nine trips to the College World Series, but also has a combined 62 years of experience in professional baseball, including 32 years at the major league level.
In two years on The Plains, Hudson turned in the best two-way season in program history and helped lead the team to the College World Series. During the 1997 season, the Columbus, Georgia native posted a 15-2 record with a 2.97 ERA and 165 strikeouts while also hitting .396 with 18 home runs and 95 RBI. Hudson led the NCAA in wins while his strikeout total was the highest in the SEC. He went on to be named the 1997 Rotary Smith Award winner, First Team All-America and the SEC Player of the Year.
“I appreciate Coach Thompson for giving me the opportunity to join the great coaching staff at Auburn baseball,” Hudson said. “I’m thrilled to have the chance to work with these young men and help them build on a successful and memorable 2019 season.”
“There’s no doubt that we have a great pitching staff, and I’ll do my best to get to know each of those pitchers to help them be as successful as they can be, both on and off the field,” Hudson added. “I’m excited about getting started, and I’m grateful for this chance to rejoin the Auburn baseball family. I can’t wait to put that Auburn uniform on again.”
Following his Auburn career, Hudson was selected by the Oakland Athletics in the sixth round of the 1997 MLB Draft and went on to spend 17 years in the big leagues with Oakland (1999-2004), Atlanta (2005-13) and San Francisco (2014-15). He posted a 222-133 career record with a 3.49 ERA, was a four-time MLB All-Star and won a World Series. Hudson also finished fifth in the Rookie of the Year race in 1999, placed in the top six of Cy Young voting on four occasions and was named the 2010 Comeback Player of the Year with Atlanta.
Hudson, who was inducted into the Braves Hall of Fame in 2018, ranked ninth in wins, 17th in innings pitched and 30th in wins above replacement among qualified major league pitchers during his time with the club. His .611 win percentage is the third-best mark in Braves history, and he ranks fifth in the organization in wins (113), ERA (3.56), strikeouts (997) and innings pitched (1,573.0). At the time of his Braves Hall of Fame induction, the right-hander was one of only 21 pitchers in MLB history to win at least 200 games, post 2,000 strikeouts and have a .600-or-higher career winning percentage.
Hudson also went on to be inducted into the Alabama Sports Hall of Fame as a member of the 50th anniversary class in 2018.