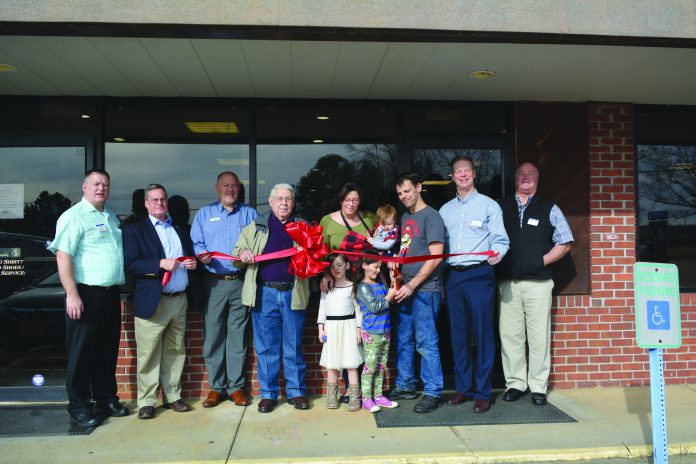 Presley and Sabrina Copeland’s dreams of opening their own restaurant were realized last week, hosting a ribbon-cutting ceremony with officials from the city of Smiths Station and East Alabama Chamber of Commerce.
Located in the former home of Mike and Ed’s BBQ at 2245 Lee Road 430, the American Dream will continue offering classic Southern-style barbecue. However, Presley said the menu will be more expansive, with items like their famous “Dawg Pile” chili dog, jumbo chicken wings and signature peanut butter pie.
“The menu will change based on customer feedback and what they want. But, we also want to give them quality food as well,” Presley said. “We want to keep the menu simple but have just enough options and variety to keep the stuff made in our kitchen.”
Sabrina added that “most of their dishes and sauces will be made from scratch daily … prepared with love and the highest quality ingredients.”
The Copelands first met each other in 2011 while working at Carrabba’s in Columbus.
Presley, fresh out of the Army at the time, was originally from southern California, moving to Columbus because of his stationing at Fort Benning. Sabrina, born and raised in Saratoga Springs, New York, moved to Columbus to be with her sister and experience life outside of her home state.
Starting as friends, the two eventually fell in love and started a family. Presley continued working at Carabba’s until last year, leaving as kitchen manager to pursue his dreams in Smiths Station.
The space became available last fall after Mike and Ed’s abruptly closed in mid-September. After talks with the building owner, they secured the property on Dec. 1, immediately starting the process of revamping the space.
American Dream had a soft opening on the night of the city of Smiths Station’s Christmas tree-lighting ceremony Dec. 12. Since then, the Copelands have opened the restaurant five to six days a week, but with minimal hours and no additional staff as they work to find their footing before their planned Jan. 25 grand opening.
“We love being here in Smiths Station. The way the community here welcomes the military is huge, plus its Southern feel,” Sabrina said. “We’re very excited to continue meeting people and becoming more a part of the community.”
Plans that will soon be realized are an online order app, delivery service (barbecue and Italian-based menus) and hosting large-scale events on the property like car shows. Final hours of operation have not been set, but Sabrina will keep them posted on the restaurant’s Facebook page. With enough customer demand, they will look to expand and serve three meals daily beyond their regular lunch and dinner options offered now.
For more information or to view a menu, call 334-384-9667 or like and follow their Facebook page “The American Dream.”