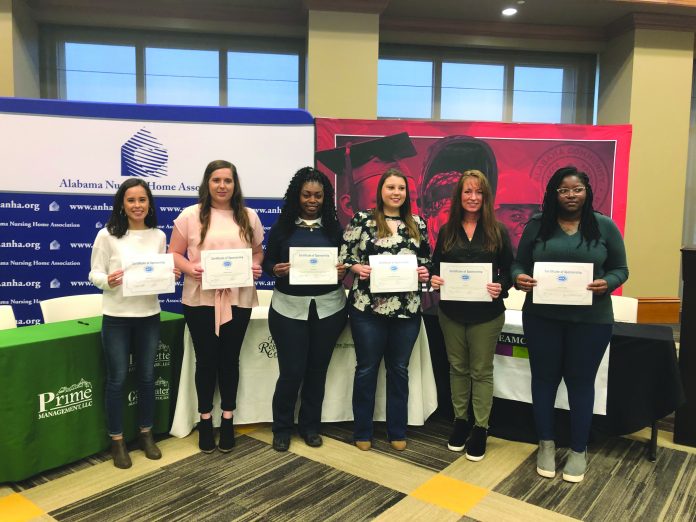 Six of Southern Union State Community College’s nursing students signed with area healthcare facilities last Thursday in the first “Alabama Signing Day for the Alabama Nursing Career Pathways Initiative,” a partnership among Alabama’s community colleges and the Alabama Nursing Home Association.
The ANCP is a statewide community college initiative that pairs nursing students with employers for what are known as workplace externships. The externships are specialized, 7-month training programs that pay students a salary and provide scholarships for their education in critically needed healthcare fields. Employers also sign commitments with the externs to cover the cost of licensures throughout the externship, as well as grant the externs two years of employment after completion of the externship.
Following are the names of the six signees and the companies where they practice their externships:
-Frankie Ammons (Auburn) – Arbor Springs Health & Rehab
-Shontesia Austin (Auburn) – skilled nursing facility care at East Alabama Medical Center
-Michelle Elliott (Opelika) – Arbor Springs Health & Rehab
-Aubry Gray (Phenix City) – Arbor Springs Health & Rehab
-Shamel Hart (Auburn) – skilled nursing facility care at East Alabama Medical Center and
-Victoria Bearden Harrison (Auburn) – Dadeville Healthcare Center.
The students who qualified for the program interviewed with each company to determine their selection for the externships.
According to Arbor Springs Administrator and Region 6 Director for the Alabama Nursing Home Association Matthew Lewis, the externship opportunity began because of the reputation Alabama’s community colleges have statewide in regard to top quality healthcare programs.
“The demand for highly qualified nurses continue to increase in Alabama, and particularly in the state’s nursing homes, so programs such as this one are game-changers for the state’s healthcare system,” Lewis said. “If the caliber of the nursing students signing today is any indication of Alabama’s future healthcare providers, then great days are ahead. I am grateful to Alabama’s community colleges for listening. stepping up to the plate and developing this incredible program which is an immediate benefit to East Alabama.”
The ANCP externships are a culmination of a partnership with the Alabama Nursing Home Association. According to state data, both licensed practical nurses (LPNs) and registered nurses (RNs) among the highest demand career paths in Alabama.
Southern Union President Todd Shackett praised the initiative and the success of its launch at the college.
“At Southern Union, we serve as the bridge between our students and the best version of their future. Partnerships like this one, that not only provide the on-the-ground training but also a path to guaranteed employment can be life changing for our students and I’m proud to launch this program at our college,” Shackett said in a statement.
ANCP externships will be available to nursing students statewide by 2024.
About SUSCC:
With campuses in Opelika, Wadley and Valley, Southern Union is the second oldest 2-year college in Alabama.