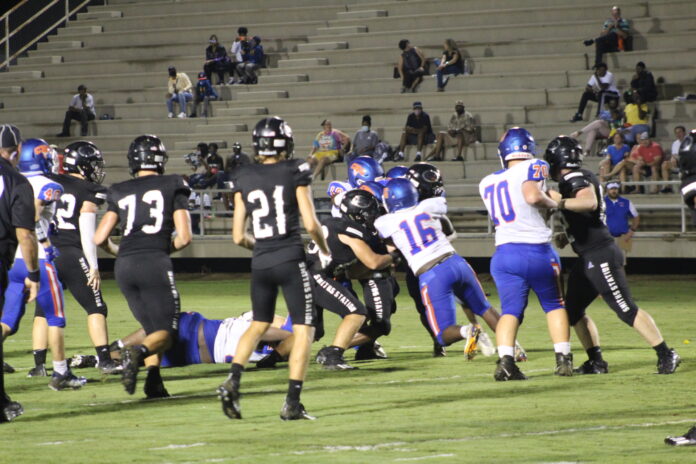 The lights at TC Britton field were not the only things shining brightly in Smiths Station on Friday night as the hometown Panthers shut out the visiting Columbus Blue Devils 50-0.
The Panthers came out swinging in the first quarter, opening the contest with a deep strike off
the arm of senior quarterback Jackson Greer; moments later, however, the offense sputtered by missing a field goal
to cap off their first drive.
Despite an ugly, back-and-forth affair in the early going, Greer led his team to paydirt by the end
of the first quarter when he connected with senior receiver Ahmari Peabody for his first
touchdown of the evening.
Smiths Station head coach Mike Glisson attributes his team’s slow start to a multitude of factors; a big factor mentioned, however,
was the absence of 30 rostered players.
“We moved the ball good the first time we had it,” Glisson said. “It’s all a blur now but we kind
of died out on our drive so we tried a field goal. We’re on our third-team long-snapper which —
the snap was fine — I don’t think the timing was there that we normally have with our first guy,
so he pushed it right.”
Glisson noted that Columbus’ ability to maintain possession in the early stages — combined with a
wet playing surface — also posed an issue.
“They kept the ball a little bit,” Glisson said. “Conditions were tough out here tonight.”
After a sloppy first quarter from both squads, the Panthers seized control of the contest in the
second and never looked back. Glisson’s squad posted another Greer-to-Peabody
touchdown through the air, a Jermaine Brown touchdown on the ground and forced Columbus
into a safety, pushing the lead to 24-0 before heading to the locker room.
Glisson credited the pickup in play to expected improvement from week one to two.
“You have your biggest improvement from game one to game two,” Glisson said. “I think you
saw it tonight with 31 guys missing. That was big.”
Smiths Station’s brief intermission from the field during halftime did nothing to slow the
Panthers down; rather, the break seemingly gave the team the opportunity to rest up and push
their lead to an outrageous size and presented Greer with the opportunity to further display his
abilities.
The senior quarterback found the endzone on a QB-keeper on SMiths’ first drive of the third
quarter, pushing the Panther lead to 30-0. Greer went on to toss yet another touchdown
to Peabody later in the quarter (which consisted of 26 unanswered points and four trips to paydirt).
Glisson was proud of his quarterback’s play following the game.

“I love the way Jackson Greer is playing,” Glisson said. “Jackson Greer, if you look at him you
think ‘that’s your quarterback?’ and I’m like ‘yeah’ but he’s got it. He’s got it. He’s a leader and
he’s a competitor.”
Greer ended his night with 220 passing yards to accompany his pair of passing touchdowns.
As the third quarter drew to a close, the Panthers had pushed their lead to 50-0 — where it
remained for the final quarter of play — and had the opportunity to give their depth players
some in-game experience; still, however, the change in personnel did not appear to impact the
performance of the Smiths Station defense.
The Panthers’ head coach was proud to see a goose egg on the score board when the clock hit
double zeros.
“That’s what you can do when you all pull together and do your job,” Glisson said. “Columbus,
they’ve got some players. They’ve got some athletes in some key positions and I thought our
defense was good. I think that was the first shutout we’ve had since I’ve been here.”
With what Glisson considers to be a bounce-back win behind them, the Panthers must now
turn their attention to next week’s opponent: unbeaten Central High School.
The fourth-year head coach knows the challenge at hand; however, is ready to begin game
planning, riding the momentum of Friday’s contest and getting to work.
“They feel good about themselves right now,” Glisson said. “We build on that starting Sunday.
We put our game plan in and we show them what they did good and what they’ve got to do
better. Then we talk to them about the challenge they have. Central is a good team and
everybody calls it rivalry week until we beat them — and we’ve not beat them in a long time.”
The Panthers will take on the Devils on Friday, Sept. 7. Toe meets leather in Phenix City at 7
p.m. EST.