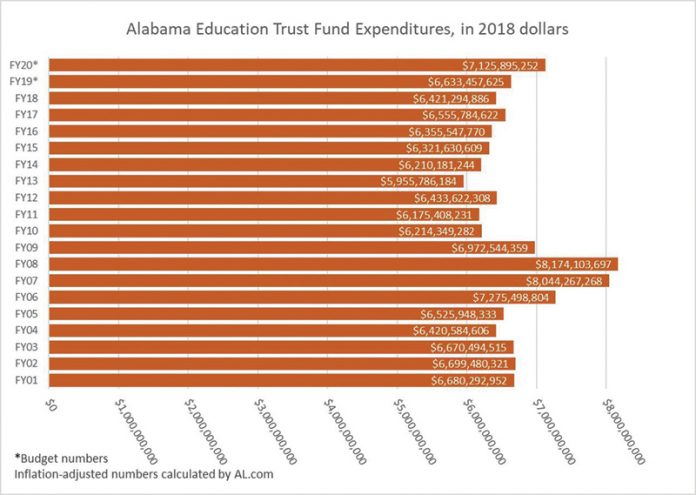 “This year, despite all the turmoil and chaos, we are on track to have the largest budget ever passed for education in this state, while also spending an amount far less than initial projections,” said Sen. Arthur Orr (R-Decatur), chairman of the Senate Finance and Taxation Education Committee.

“We were able to craft the largest education budget in our state’s history,” Senator Orr said. “This legislation puts education first and I’m grateful to my colleagues in the House for their help in creating this budget.”

While none of the money allocated was from the federal government, Senator Orr said, he does expect monies being made available to educational institutions across the state because of COVID-19.

“This is a budget we can all be proud of that takes into account the educational needs of our state while also spending conservatively during these uncertain times,” Senator Orr added.

“This is the largest education budget in state history and it is a good budget. It was important to give our teachers and administrators something to work with as they plan for the next school year before we got deeper into the summer,” Marsh said. “I want to thank Senator Orr and his staff, as well as the members of the education budget committee for their commitment to crafting a sensible, fiscally responsible spending plan despite a difficult situation. Every Senator should be proud of this budget and the support it provides for our teachers and students.”

“This is a banner day for education. Despite the current situation, we now have the largest education budget in Alabama history that puts teachers, students and administrators first,” Senator Reed said. “A strong system of education is the foundation of a thriving state, and the fact that we are able to pass this budget without cuts or proration is a testament to the sound principles with which the Republican controlled Senate operates. I want to thank Senator Orr and the members of the education budget committee for their work on a budget we can all be proud to support.”