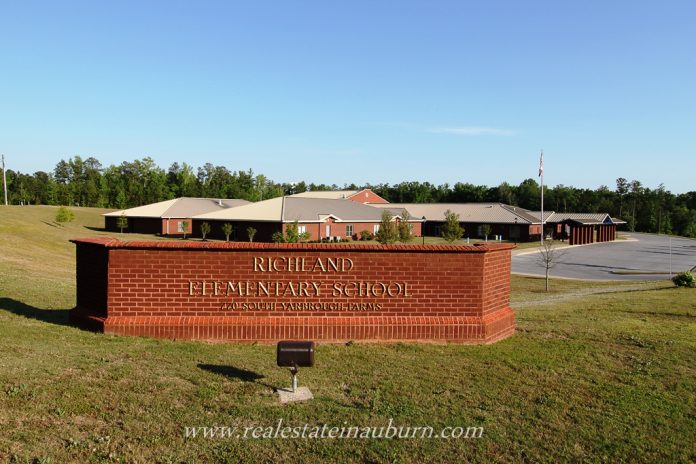 Attorney Gen. Steve Marshall announced last week the winners of the 2018 Alabama Safe Schools Initiative Awards of Excellence, including Auburn’s Richland Elementary.
A panel of independent judges met at the Attorney General’s office to review submissions from 94 schools throughout Alabama, a record number since the program began in 2002 and twice the number received last year. Winners were selected from each of the eight state school board districts as well as private schools for each state region.
“In these times, we are all intensely aware of the serious responsibility our schools carry for the safekeeping of our children,” Marshall said. “The Alabama Safe Schools Awards of Excellence is an important tradition of the Attorney General’s Office, to recognize schools throughout our state for dedication and excellence in keeping students safe. Each day that parents leave their children at school, they are entrusting what they hold most precious into the care of schoolteachers, principals, school resource officers and other staff. With these awards, we honor those who have achieved particularly high standards and set examples that others may follow. We are grateful for their service and commitment to protecting the children of Alabama.”
Awards will be personally presented by Marshall during the next several weeks to the winning schools. Below is a list of the 10 award recipients for the state school board district and state regions for private schools:
District 1, Orange Beach Elementary School, Orange Beach, Baldwin County
District 2, Richland Elementary School, Auburn, Lee County
District 3, Nichols-Lawson Middle School, Sylacauga, Talladega County
District 4, Eastwood Middle School, Cottondale, Tuscaloosa County
District 5, Prattville Junior High School, Prattville, Autauga County
District 6, Decatur High School, Decatur, Morgan County
District 7, Hewitt Trussville Middle School, Trussville, Jefferson County
District 8, Morris P-8 School, Huntsville, Madison County
Private School, Central Region, Saint James School, Montgomery, Montgomery County: Private School, Southern Region, The Lakeside School, Eufaula, Barbour County.