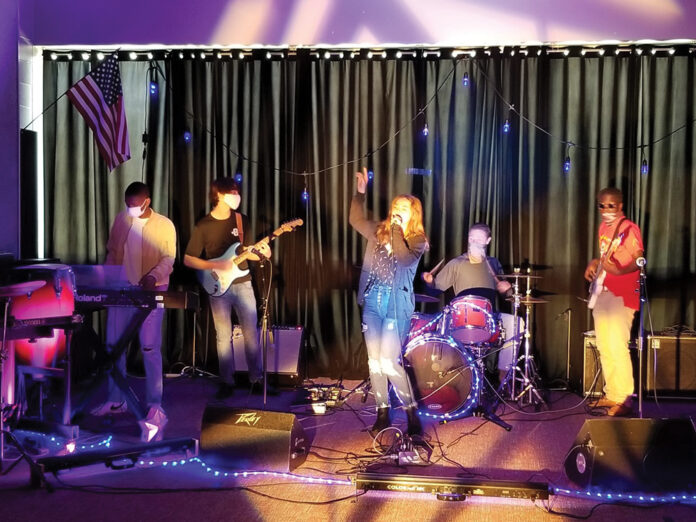 Troy University and the John M. Long School of Music are proud to present the Opelika High Vibe at MIC CHECK 2021. This virtual event is for students at all levels that have an interest in pursuing careers in the music and entertainment industries. Artists and groups have the opportunity to interact with industry professionals over the two-day event to be held April 30 – May 1.

The Opelika High School Vibe is an audition-based group that performs American Popular music in Lee County. From Jazz, to Pop, to Rock and Hip-Hop, this versatile group of singers and instrumentalists perform regularly for their community. The Vibe was started in 2016 to study popular music, performing a variety of genres at festivals around the Southeastern United States. Under the direction of Patrick Bruce, the students’ overall goal is to be involved in all aspects of the music and entertainment industry. Troy University is excited to see the return of the familiar talent of The Vibe.

POPulus is proud to have alumni of Opelika High School such as Caleb Etris, a bass guitar player. Etris speaks fondly of his time in the OHS Vibe.

“Being in the Vibe prepared me for POPulus by showing me a snippet of what it’s like to perform in front of a crowd,” Etris said. “It taught me to look at music differently. The Vibe was a wonderful experience and it introduced me to Troy University and all it has to offer.”

MIC CHECK 2021 features guest artist Michael Wilk of the iconic band Steppenwolf. His keyboard lines on hits such as “Born To Be Wild” and “Magic Carpet Ride” have been heard and enjoyed by countless millions around the world. His experiences and success in performing and production include performing and working with other well-known artists including Mick Fleetwood of Fleetwood Mac, Danny Hutton of 3 Dog Night and the Pointer Sisters, among others. His work as a film composer includes music from the movie soundtrack “Satisfaction” (starring Justin Bateman and Julia Roberts), as well as the soundtrack for “Pretty in Pink” (starring Molly Ringwald). In addition, his musical credits include a popular Diet Pepsi ad starring Ray Charles and featuring Jerry Lewis, Bo Jackson, Vic Damone and Charro.

MIC CHECK 2021 is a virtual educational experience featuring clinics by Michael Wilk and other industry professionals. Creating your future in the music and entertainment industries is a primary focus throughout. In addition, concerts will be presented featuring developing artists from high schools and colleges around the Southeastern United States and streamed via YouTube. The streamed concerts are open to the public and will be presented both evenings beginning at 7 p.m. CST. Featured groups include the Florence Academy of Fine Arts (Florence, Alabama), Mount Vernon School (Atlanta, Georgia), Opelika High School (Opelika, Alabama) and Lurleen B. Wallace Community College (Andalusia, Alabama). In addition, POPulus, Troy University’s American Popular Music Ensemble, will perform each evening featuring popular music of all styles and genres.

For students interested in attending MIC CHECK 2021, registration is available online at tinyurl.com/troymiccheck. For additional information, please visit MIC CHECK 2021 on Facebook at facebook.com/troyuniversitymiccheck. Concert performances will be streamed via YouTube, accessible on the MIC CHECK 2021 Facebook page.