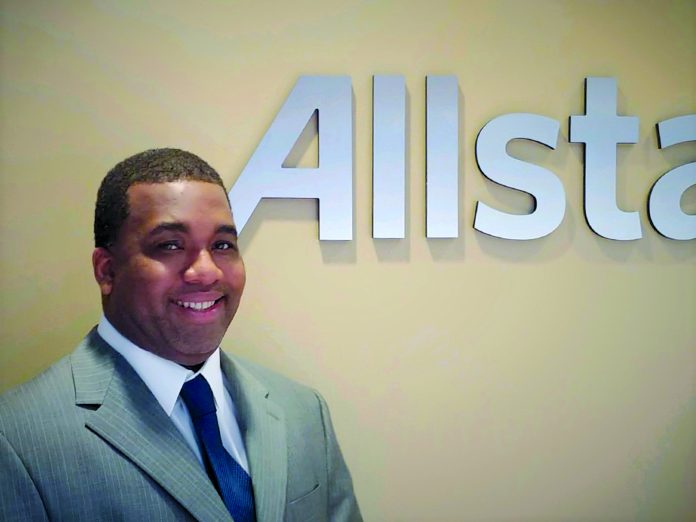 Since last October, new Allstate agent Travis Carswell has been working to get plugged into the Auburn-Opelika area and build lasting relationships throughout the community.
Carswell officially joined Allstate as a field sales leader in 2015, and was based in Birmingham. Seeing company research and statistics about the Auburn-Opelika area’s growth, he said it was a “no-brainer” to relocate here and pursue the opportunity of owning and operating his own agency.
“(The last few months) have been great. I’ve helped sponsor several events including O Day in the Village and worked to get out there and meet people,” Carswell said.
Originally from a community outside of Macon, Georgia, Carswell was an elite baseball and football prospect in high school and played collegiately at The Citadel. After his junior year, he transferred to the University of North Alabama where he majored in business management.
As a graduate assistant at UNA from 2000 to 2003, Carswell worked under coaches Bill Hyde and Mark Hudspeth, the latter of which helped restore a roar in the Lions football program, compiling a 66-21 record in seven seasons.
During the next six years, Carswell taught and coached at Marengo (Alabama) and Baldwin County (Georgia) high schools. In 2008, he sought a different career and became a training coordinator for the Georgia Department of Behavioral Health and Developmental Disabilities.
Football once again beckoned to Carswell in 2011, as he was offered the offensive coordinator position at Birmingham’s Miles College, a Division II historically black institution. Alongside Coach Reginald Ruffin, Carswell and the coaching staff led a historic turnaround of the Golden Bears program during his four years with the school.
The daily grind of being a college football coach took its toll on Carswell and time spent with his family, ultimately resigning from the school in February 2015, a month before joining Allstate.
Located at 2352 Pepperell Parkway within the Pepperell Corners Shopping Center plaza, Carswell and his staff offer customers “a convenient and accessible” location.
Available insurance policies through Carswell’s agency include: auto (standard and non-standard), commercial, home, liability, life, renters and workman’s compensation. They also offer financial planning and advice for customers.
“Unlike our major competitors, Allstate teaches its employees like myself to take the time, not 15 minutes or less, to get to know our customers and know what their needs are to provide them with the best possible policy. That’s the best way to build lasting trust and relationships in my opinion,” Carswell said.
The agencys’s hours of operation are 8 a.m. to 5 p.m. Monday through Friday and 10 a.m. to 2 p.m. in Saturday’s or by appointment.
For more information, call 334-737-6760 or like and follow the agency’s Facebook and Instagram pages.